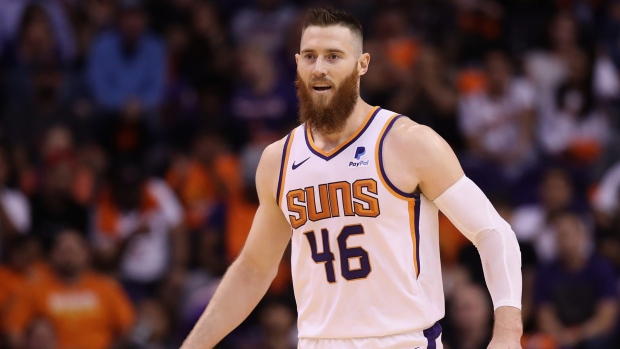 TORONTO – In most cases, two days isn’t an exorbitant amount of time, but in the context of NBA free agency – particularly during this year’s accelerated off-season, where everything seems to be moving at light speed – it can feel like an eternity.

Coming off a career season with the Phoenix Suns, veteran centre Aron Baynes had a few good options once the negotiation period opened on Friday evening. Even in what was thought to be a buyer’s market, big men were getting paid early.

First, Meyers Leonard agreed to a two-year, $20 million deal to remain in Miami, then Detroit inked Mason Plumlee for three-years at $25 – not bad for a pair of journeymen centres. San Antonio re-signed former Raptor Jakob Poeltl for $27 million over three years and Davis Bertans got five years and $80 million from Washington. Dwight Howard tweeted his intentions to stay with the Lakers, then called an audible and went to Philly, because of course he did. JaMychal Green went to the Nuggets, Christian Wood to the Rockets.

One-by-one, bigs were flying off the board, but Baynes – one of the best available – watched and waited.

The Toronto Raptors had reached out to the 33-year-old and his representatives early in free agency but were transparent about their situation. They planned to offer Serge Ibaka and Marc Gasol one-year deals and hoped to bring at least one of them back. They expressed interest in Baynes, but the salary and amount of playing time they could offer was contingent on what Toronto’s incumbent centres decided to do.

The conversation heated up when Ibaka opted to sign with the Clippers late Saturday night, and once it became clear that Gasol was bound for the Lakers on Sunday evening, Baynes and the Raptors came to terms on a two-year, $14.3 million deal (the second season is reportedly a team option).

"It was a very long 48 hours," said Baynes, who was introduced as a member of the Raptors shortly after his signing became official on Wednesday afternoon. "But they say good things come to those who wait."

"I was looking [at] a few opportunities out there and this was definitely one of them. I knew there was always an option and I was just hoping for a good situation. Definitely the basketball role here is something I’m looking forward to. At the end of the day, that’s what it’s all about. I just want to go out there and compete and hopefully earn those minutes under Nick [Nurse], so looking forward to it."

With the departures of Ibaka and Gasol, who logged the vast majority of playing time at the centre position for Toronto last season, the Raptors have plenty of minutes to divvy up. That was one of the things that made this situation appealing for Baynes, but it also means that he and the rest of the team’s new-look frontcourt have some big shoes to fill.

Together, Ibaka and Gasol accounted for 22.9 points and 14.5 rebounds per game in 2019-20, not to mention all of the other intangible qualities they brought, on and off the court. Those two were crucial pieces of the Raptors’ championship core and became synonymous with the team’s culture during their respective tenures.

The incoming bigs, Baynes and Alex Len – who will reportedly be signed to a one-year deal – as well as the recently re-signed Chris Boucher, won’t replace the tandem of Ibaka and Gasol, but they can certainly help fill the void.

Baynes, who was born in New Zealand but grew up in Australia, seems well suited for Nurse’s system and should also be an immediate culture fit. He’s a tough, physical defender that can also move well for a player his size. He averaged a career-best 11.5 points in 42 games with the Suns last season, his eighth in the NBA. That included shooting a serviceable 35 per cent on 168 three-point attempts – almost twice as many as he took in his first seven seasons combined.

The three-ball was always something he worked on in practice, dating back to his years playing for Gregg Popovich in San Antonio, but he started shooting them when he was in Boston the year before last. He saw the way the league was trending – with most bigs stepping out beyond the arc and expanding their range – but, mostly, Brad Stevens told him he was hurting the team if he didn’t start taking them.

He’s already spoken to Nurse, who wants him to be even more aggressive with his shot this coming season. Not a surprise, considering how important the three-point shot is to Toronto’s offence – they were sixth in the league in attempts last year, and Ibaka and Gasol combined to take nearly seven per contest. Baynes is confident he still has room to grow in that area of his game, and playing alongside Kyle Lowry and Fred VanVleet should ensure he’ll get plenty of good looks.

That Baynes comes to Toronto with a winning track record should also help ease the transition. He won titles in the Slovenian and Lithuanian leagues before coming to the NBA, he’s made a couple deep runs with the Australian national team at the FIBA World Cup, he won a championship with the Spurs in 2014 and played for some really good Celtics teams from 2017-2019.

"I'm just looking forward to coming in and playing with these guys, because I know what they're all about," said Baynes. "That's what it is at the end of the day – we want to win and give ourselves the best chance to be able within shooting distance of getting that ultimate prize. So I'm looking forward to getting out there and going to work with these guys because I know when the game is on they battle with everything. That's what I try and do as well."

Meanwhile, Boucher should also be fully versed on what the Raptors expect, having come up through their well-regarded and highly successful player development pipeline.

Although he played sparingly for the NBA club in 2018-19 – his first year in Toronto – the undrafted big man spent most of the campaign with Raptors 905, where he won the G League’s MVP and Defensive Player of the Year awards. He took another step forward last year, impressing in limited minutes as the third centre in Nurse’s rotation – averaging 6.6 points, 4.5 rebounds and 1.0 block in 13.2 minutes.

He can be erratic at times, and there’s some question as to whether his rail thin frame will hold up against bigger and more physical bigs, but he’s shown promise with an intriguing and versatile skill set. With his new contract - $13.5 million over two years, though the second season is non-guaranteed – the Raptors want to see what he can do in an expanded role.

Even on a roster that’s loaded with incredible success stories, Boucher’s stands out. Born in Saint Lucia but raised in Montreal, Boucher was living in poverty when he dropped out of high school at age 16 and went to work as a dishwasher at a St-Hubert restaurant. He didn’t start playing basketball until he was a teenager, which explains why his game is still growing at age 27.

As a young big man in the NBA, it’s hard to imagine a better apprenticeship then playing behind and learning from a couple of great – and very different – veteran centres in Gasol and Ibaka.

With a wealth of experience and knowledge, Gasol is a walking basketball encyclopaedia. An elite defender, exceptional passer and consummate professional – that’s the brain you want to be picking.

Over the past couple years, Ibaka really embraced his role as a mentor for Toronto’s young players, and Boucher was one of the guys he took under his wing. Few put more time into their craft than Ibaka, who was almost always the last Raptors player in the gym after practices. At age 30 and in his 11th NBA campaign, he just had his best season – a credit to his work ethic.

If Boucher is going to take that next big step as a player and be one of the successors to Gasol and Ibaka in the Raptors’ frontcourt, he’ll need to show that he’s taken something from his time with each of them.

"They are two different players that definitely gave me two aspects of the game," said Boucher. "Marc was a facilitator, his basketball IQ is really high, and I've learned so much about being able to put your teammates in a good position and also knowing you don't have to be the fastest guy but you’ve always got some techniques that you can use, and he helped me a lot with that. And when it comes to Serge, just knowing what it takes to be ready all the time, and his shot and how much he was working. I think that really helped me out. And especially when I came here in my first year, he helped me out a lot with just realizing that it's just the beginning and that there's a lot of work to be put in.  Unfortunately he left, but I think I’ve learned a lot from and he was a good vet for me."