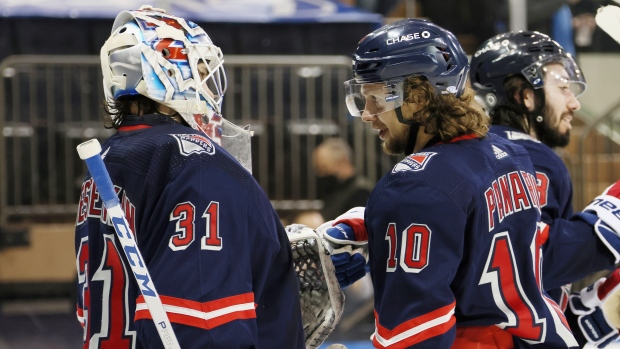 “Igor’s been great for us,” Blackwell said. “He really kept us in that game. They had a couple of chances, a couple of flurries where they kind of pressed the ice toward us and he made some big saves."

Shesterkin finished with 16 saves for his second NHL shutout — and second in three days against the Devils. He had 27 saves in a 3-0 win at New Jersey on Tuesday night. In this one, he had to make three saves in the first, nine in the second and four in the third. The Rangers also blocked 20 shots in front of him.

“Indeed there was not much work in this one,” Shesterkin said through a translator. “Guys did a great job, they blocked a lot of shots. I was facing some easier shots and the fans really helped a lot. That’s how I kept the concentration.”

The Rangers remained four points behind Boston for the fourth and final playoff spot in the East Division after the Bruins beat the New York Islanders 4-1.

Mackenzie Blackwood finished with 29 saves while taking a regulation loss for his fifth straight start. The Devils have now lost four straight and eight of nine (1-6-2).

“We gave up chances we don't normally give up,” Devils coach Lindy Ruff said. “We didn't have nearly the energy we had the other night. ... It's a game that was pretty disappointing for us.”

The teams continue their four-game series Saturday back at Madison Square Garden, and Sunday in New Jersey.

The Rangers got off to fast start, scoring three times in the first period.

Trouba got the Rangers on the scoreboard 47 seconds into the game as he took a pass from Blackwell and beat Blackwood from the right circle for his second of the season.

Lindgren made it 2-0 at 6:39 with his first goal of the season as he got a pass from Panarin and beat Blackwood from between the circles inside the right post..

Panarin scored on a one-timer from the top of the right circle off a pass from Ryan Strome on a 2-on-1 rush to made it 3-0 with 8 minutes left in the first.

“It’s nice to dominate a game,” Panarin said through a translator. “We obviously caught our game, but it was not ideal. We have some details to work on and improve for very serious games coming up.”

When asked to elaborate on what he felt they needed to improve, Panarin added: “Fewer giveaways on the blue line ... so we have to tighten that up and play a little better defensively and approach the next few games very seriously.”

Hughes had a chance off a Rangers turnover, but Shesterkin denied his attempt in close about 5 minutes into the second.

Panarin got his second of the night to push the Rangers' lead to 4-0 with 7:09 left in the middle period. Blackwell brought the puck up the right side and fired a shot that went of the end boards and the side of the goal. The puck came out to the right side, where Strome swooped in and passed it over to Panarin, who quickly put it past Blackwood for his 15th of the season.

P.K. Subban hit a goalpost for New Jersey with about 5 minutes left in the second.

“We were fortunate with our opportunities early,” Rangers coach David Quinn said. “We might have had three or four scoring chances early and we capitalized on all three of them, which really can change the complexion of the game. I thought the second period we got away with some stuff, our goalie had to make some big saves. ... We know we’ve got to be better.”

Blackwood is now 0-5-2 with a 3.71 goals-against average in seven starts since getting the win in a shutout at Boston on March 28. That victory ended a stretch of three wins in four starts.

Zibanejad had an assist on Trouba’s early goal, extending his point streak to four games. He has 15 assists and 27 points in his last 18 games.

Rangers rookie Vitali Kravtsov appeared to get his first NHL goal just past the midpoint of the third period, converting a nice, cross-ice pass from Pavel Buchnevich on a Rangers rush. However, the goal was disallowed after Ruff challenged the play for offside.

Zac Jones, the defenceman who helped UMass win the national championship earlier this month, has been skating with the Rangers just days after signing his entry-level contract.

Quinn said he has liked what he has seen from the 20-year-old, but was unsure when he'd put him in the lineup.

“You've got a guy who can really skate, he's got a great hockey I.Q., just competes,” Quinn said. “But this is the National Hockey League and you don't just take a someone and drop him in the lineup. They've got to earn it and they've got to give you reason to put him. ... We certainly won't hesitate from putting him in if we think he'll help us win.”