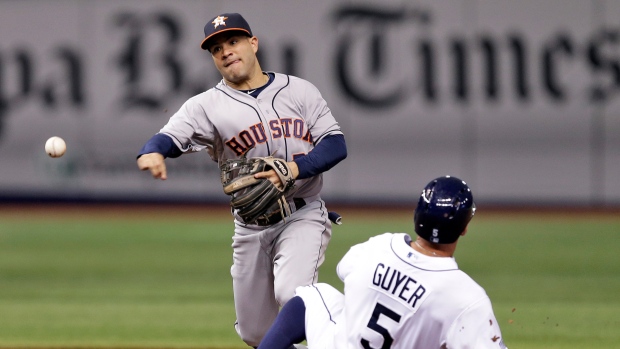 (SportsNetwork.com) - The Houston Astros will square off at Tropicana Field with the Tampa Bay Rays Saturday in the third contest of a four-game series seeking a second straight win directly following a four-game losing skid.

Tampa Bay's Jake Odorizzi goes for his third victory of the season, while right-hander Jake Buchanan will step in for Houston to make his major league debut.

Odorizzi has had a disastrous stretch for the Rays, and enters this contest searching for his first win since a May 14 battle against Seattle. He sports a 2-7 record with a 4.73 ERA, though he has notched 81 strikeouts to 28 walks on the year.

Against Baltimore in his latest outing, Odorizzi spent 5 1/3 innings on the mound and surrendered three hits and two earned runs with five strikeouts. He was handed a no-decision, extending his six-game winless stretch (0-4).

The 24-year-old Buchanan, meanwhile, will be recalled from Triple-A Oklahoma City to make a spot start in place of Brad Peacock, who is recovering from a bout of food poisoning.

Buchanan has gone 6-4 with a 3.54 ERA in 14 games in the minors this season, with all but one of those appearances starts.

Peacock, who did manage to throw a bullpen session on Friday, could be available to pitch out of the bullpen on Sunday before returning to the rotation.

The two teams went head-to-head Friday night in the second game of the series, which saw the Astros outpace the Rays for a 3-1 victory. Both starting pitchers - Jarred Cosart for Houston and David Price for Tampa Bay - pitched eight innings in the contest.

Cosart earned his seventh win of the season after hurling eight innings of six-hit, scoreless ball. Chad Qualls entered the game in the ninth inning for the save, although he surrendered a run in the process.

George Springer homered for the 'Stros off Price in the third inning - his 13th of the season - that plated two. That was all the cushion Cosart would need.

"I was a little bit in front of it and just didn't want to hook it," Springer said. "I was actually saying to myself, 'Just stay fair.'"

Jose Altuve recorded a team-high three hits on the night. He leads the American League with 101 hits on the season.

Price was tagged with the loss after pitching eight innings of six-hit, two- run baseball. He struck out 12 batters in the process.

The Rays have dropped 13 of 19 games played in the month of June.