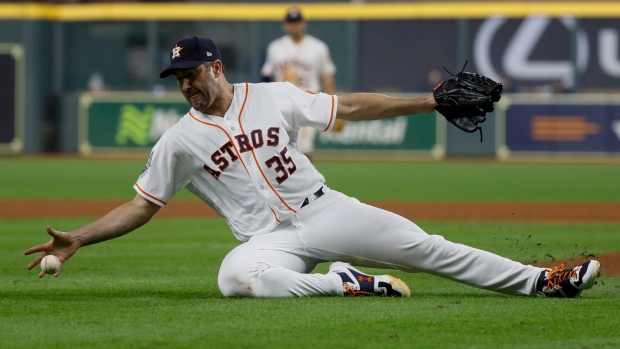 Not those 225 wins, not the 3,006 regular season strikeouts, not the record 202 post-season Ks. Not the eight All-Star selections, not the 2011 Cy Young Award and Most Valuable Player prize.

Verlander dropped to 0-5 in World Series games Wednesday night as the Washington Nationals routed the Houston Astros 12-3 for a 2-0 Series lead. That skid on baseball's biggest stage is dragging the right-hander's reputation down like ballast sinking a ship to the bottom of the sea.

Never before has a pitcher lost his first five World Series decisions.

"We don't dwell on win-loss record anymore, right?" he said with a smile, a reference to modern analytics by one of the sport's most knowledgeable players. "I'd like to win a couple. Hopefully, I'll have another opportunity."

He wound up flat on his back in the fourth inning, slipping on Ryan Zimmerman's grounder and firing the ball off his own left leg . Verlander could smile about that one, an instant blooper reel staple.

But he was razed along with all the Astros in the seventh, and that was no laughing matter.

On his 100th pitch, Verlander gave up a go-ahead home run to Kurt Suzuki , who had not driven in a run in this post-season, the start of a spirit-crushing six-run inning that lifted Washington.

Suzuki is a .340 (16 for 45) hitter against Verlander, and the big home run off a 94 mph fastball at the letters came on Verlander's second pitch to catcher Martín Maldonado, who had not been behind the plate for Verlander since the 2018 AL Championship Series.

Prior to Suzuki's at-bat, every pitch by Verlander this season had been delivered to catcher Robinson Chirinos, who left when manager AJ Hinch replaced him with pinch-hitter Kyle Tucker, who struck out with two on for the final out of the sixth.

"Maldy and I had worked together a lot last year," Verlander said. "First-pitch curveball for a ball, and then fastball that was right there for him."

A likely Hall of Famer with a supermodel wife, the 36-year-old Verlander has a 5.73 ERA in six World Series starts.

He had a chance to close out the Los Angeles Dodgers in Game 6 of the World Series two years ago but wasted a sixth-inning lead in a 3-1 loss. The Astros rebounded the next night for their first title.

Then, in this month of frustration, he had a chance to close out the AL Division Series against Tampa Bay in Game 4 on short rest, but he gave up three runs in the first inning of a 4-1 loss.

He had a chance to finish out the AL Championship Series against the New York Yankees in Game 5 but allowed four runs in the first inning of another 4-1 defeat.

Trea Turner started with just the third four-pitch walk leading off a game in Verlander's big league career and the first in 11 years.

"Just being a little out of sync for the first batter," Verlander said. "I'm not going to panic about it and think that's anything other than just an anomaly."

Adam Eaton singled and Anthony Rendon put the Nationals ahead on Verlander's ninth pitch with a two-run double off the left-field wall. Verlander is 1-3 with a 4.15 ERA in five October starts, winless since the Division Series opener.

"In the regular season, you're like, 'OK, here it is, hit it, right down the middle.' In the World Series, it's a different story," Verlander said. "You can't really ever do that. You still got to hit your spots."

He has allowed nine first-inning runs, most for any pitcher in one post-season, according to the Elias Sports Bureau.

"I think most kind of big, elite physical pitchers may have a little trouble getting into the game," Hinch said. "But JV has been exceptional the entire season, including the first inning."

Verlander was 21-6 with a 2.58 ERA during the regular season, leading the major leagues in wins for the third time, throwing his third no-hitter and forming a dynamic duo with Gerrit Cole. In the World Series, they've hardly been so formidable. Cole allowed five runs in a 5-4 loss to open the Series.

Verlander could laugh about hitting his own leg, at least.

"Seventy-five per cent of that play was pretty athletic," he said with a laugh, mixing in a profanity. "It was a one-in-a-million play, anyway."

In early 2018, he took a poke at Dodgers pitcher Yu Darvish, who had slipped rounding second base on a double, tweeting: "Not doing a lot here to help us dispel the pitchers aren't athletes thing."

"He's probably been waiting in the weeds forever," Verlander said, "waiting for his opportunity for me to do something stupid."