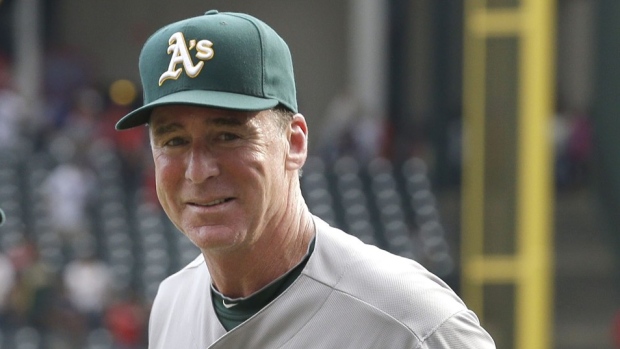 OAKLAND, Calif. - Support his big moves or not, Billy Beane made one thing perfectly clear: The Oakland Athletics' season probably would have ended sooner without Jon Lester a part of it.

Oakland had the man on the mound it traded for to shine in these very moments, and the A's summed up their topsy-turvy season in a single game, over a span of innings — and extra innings.

A roster of tired, banged-up bodies that owned baseball's best record as recently as mid-August and stumbled through September is now headed into the off-season after a 9-8, 12-inning loss to the Kansas City Royals in Tuesday's wild-card game.

Beane went all in on July 31, dealing slugging left fielder Yoenis Cespedes to the Boston Red Sox for Lester, the veteran left-hander who seemed poised to pitch his team into the division series before Oakland collapsed once more late this season.

"Simply put, if we don't have Jon Lester, I don't think we make the playoffs," Beane said Wednesday as players packed up their belongings in a quiet clubhouse.

The small-budget A's beat out the big spenders in the Lester sweepstakes. Then Wednesday, Beane bid Lester a likely farewell as he heads off for a big-money contract elsewhere.

An offence that had been prolific to that point almost immediately went into a long funk, sparking questions and scrutiny about Beane's decision to part ways with someone as dynamic in the middle of the order as Cespedes, the two-time reigning Home Run Derby champ. The Cuban defector signed a $36 million, four-year contract before the 2012 season.

Manager Bob Melvin handed the ball to Lester on Tuesday with the season on the line and Oakland built him a nice lead that appeared would be plenty, and the recent struggles might all be forgotten as things started fresh. Yet that 7-3 cushion wouldn't last against a determined Royals team, a starved franchise and fan base celebrating the organization's first playoffs since 1985.

The A's went 88-74 to get back to the playoffs, failing to stay with the red-hot Angels down the stretch after Oakland won the previous two AL West crowns.

The September collapse baffled all involved, Melvin and his players alike were regularly at a loss for words in describing the various ways they were failing to come through — or, like Tuesday night and some many others recently, to finish off an opponent when the opportunity arose.

"I'm proud of the fact we went to the playoffs for a third time in a row," Beane said.

Had the A's advanced, neither centre fielder Coco Crisp nor catcher Geovany Soto would have been available because of injuries sustained Tuesday.

Beane speaks of small windows of opportunity for this club.

He got aggressive this summer to give the A's their best shot at a deep October run this time on the heels of consecutive five-game losses in the division series to Justin Verlander and the Detroit Tigers.

Lester was the perfect pitcher to take Oakland further at last, just as he did leading the Red Sox to a World Series championship only 12 months ago. He threw a no-hitter against the Royals in 2008 to boot.

Beane's other deals included the July 4 acquisition of right-handers Jeff Samardzija and Jason Hammel from the Chicago Cubs for three top prospects.

On Aug. 31, the GM traded away pitching prospect Nolan Sanburn for Adam Dunn, who reached the playoffs for the first time but never saw the field Tuesday and has plans to retire without a single post-season at-bat. He had counted on this being his chance in his 14th major league season.

"Horrible, it's an awful feeling," said Melvin, who fully expected to be in the ALDS and use Dunn. "I have so much respect for Adam Dunn that it kills me he didn't get in that game."

At the start last spring, the A's lost two top starters to season-ending elbow injuries and eventual Tommy John surgeries in Jarrod Parker and A.J. Griffin. Given an organizational focus on building depth from the bottom of the farm system on up, Oakland had the arms to withstand those losses, and, eventually, even the excess with the additions of Hammel and Samardzija that Beane traded left-hander Tommy Milone to the Twins when he became the odd-man out and found himself in the minors despite an impressive winning stretch.

Now, Oakland must decide who will play shortstop in 2015 given Jed Lowrie is set to become a free agent at a position that won't have many.

"It's somewhat cathartic for us to start working on next year," Beane said. "There's still a lot of good pieces here. We're very much a jigsaw puzzle."