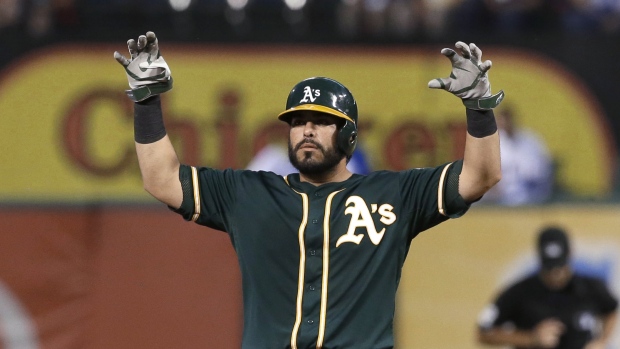 KANSAS CITY, Mo. - Athletics catcher Geovany Soto left Tuesday night's AL wild-card game against the Kansas City Royals after hurting his left thumb in the first inning on a play at the plate.

Soto got the start for Oakland over Derek Norris, even though he had never caught Jon Lester, because he had been swinging a hot bat and is better at dealing with base runners.

The Royals led the majors this season with 153 stolen bases.

Soto was hurt while tagging out the Royals' Eric Hosmer, who tried to score from third base on a bizarre play in which Billy Butler was caught wandering off first base. While Butler was in a run-down, Hosmer broke from home and wound up being the final out of the inning.

Norris replaced Soto, who struck out in his only plate appearance, in the bottom of the third. He has worked well with Lester since the July 31 trade that brought the former Red Sox ace to Oakland.