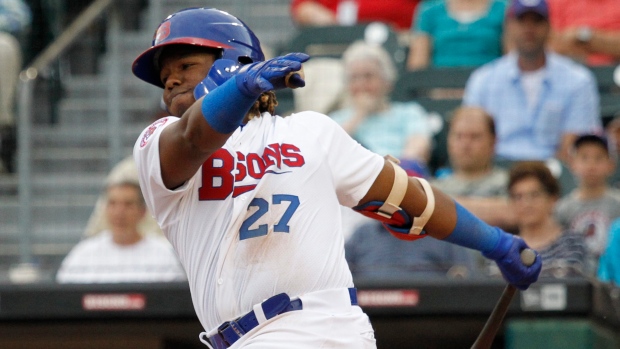 TORONTO — Another season of minor-league baseball is in the books and, similar to 2017, the past six months have provided numerous reasons to feel good about the Toronto Blue Jays’ future.

Any pipeline that features the best prospect in all of baseball is going to receive headlines, but there were a handful of performances that have the front office excited about where things are headed.

And it’s not just rhetoric, either.

After a few years of sitting in the bottom half of the league in terms of minor-league systems, the Jays are now easily a consensus top-five group, and some, including revered prospect publication Baseball America, believe they’re in the top three.

The Blue Jays’ own internal system ranking, which forecasts future WAR, has placed them fourth in all of baseball, president and CEO Mark Shapiro said recently.

No matter how subjective you find farm-system rankings, there’s no arguing the objective: There’s enough talent on the way to provide hope, even when you factor in knowing it won’t all pan out as expected.

With MiLB seasons wrapped up earlier this month, we’ve combed through all the affiliates to put together a 25-man roster of 2018 standouts, and then asked Blue Jays GM Ross Atkins to weigh in on the entire group.

These aren’t necessarily the best prospects — there’s a top 20 list attached at the bottom for that — just the best individual seasons put together by players who aren’t considered organizational filler.

C - Danny Jansen
Triple-A stats: .275/.390/.473 with 12 HR, 58 RBI, 5 SB, 44/49 BB/K
MLB stats: .260/.356/.455 with 3 HR, 8 RBI, 0 SB, 8/14 BB/K
The reason he’s here: The catcher of the future did nothing to change that projection, showing impressive contact ability and a well-rounded profile.
Atkins: “Danny has already been an incredible development story as he continues to get better. He has an extremely low swing-and-miss rate and selective approach allowing him to get in position to do damage. We are very encouraged by his ability to catch and throw and, most importantly, lead a pitching staff in the future.”

1B - Cavan Biggio
Double-A stats: .252/.388/.499 with 26 HR, 99 RBI, 20 SB, 100/148 BB/K
The reason he’s here: We’re fudging a bit since the cold corner wasn’t his primary position, but Biggio played five different spots this season: Second base (68 games), third base (34 games), first base (22 games), right field (two games) and shortstop (two innings). The Jays see him as a potential super-utility type, and they’ll continue to move in that direction by having him work in the outfield in the Arizona Fall League.
Atkins: “Has always had a patient, selective approach at the plate, and made some impressive adjustments coming into this season to access more power production at the plate, hitting the ball harder and pulling it in the air. Showed some real versatility around the infield and outfield. He’s also been an elite teammate as one of the most consistent mindsets in our system.”

2B - Kevin Smith
Low-A stats: .355/.407/.639 with 7 HR, 44 RBI, 12 SB, 17/33 BB/K
High-A stats: .274/.332/.468 with 18 HR, 49 RBI, 17 SB, 23/88 BB/K
The reason he’s here: One of the best stories in the system this summer, the 2017 fourth-round pick piled up 25 homers and 29 steals across two levels. Second base, shortstop and third base are all possibilities down the road. This year, Smith's primary spot was short, but he also played 27 games at third and 13 games at the keystone.
Atkins: “Even coming out of college, felt that there was real power potential as a guy who really understood his swing and what he was trying to do at the plate. Paid off for him this season with very strong all-around performance at the plate and in the field. He’s been one of the many highlights this year and is another tireless worker.”

3B - Vladimir Guerrero Jr.
Double-A stats: .402/.449/.671 with 14 HR, 60 RBI, 3 SB, 21/27 BB/K
Triple-A stats: .336/.414/.564 with 6 HR, 16 RBI, 0 SB, 15/10 BB/K
The reason he’s here: Umm, what more is there to say about this guy? His season took him from elite prospect to the best player in the world not in the majors.
Atkins: “The overall performance speaks for itself, but his ability to control the zone and pick his spots to do damage against advanced completion really sticks out from this year, with an extremely low strikeout rate, despite a more aggressive and damage-oriented approach. His progress as a defender and baserunner is extremely encouraging. We think Vladdy has the chance to lead and we’re confident that his passion for the game and his teammates will be a separator for him.” 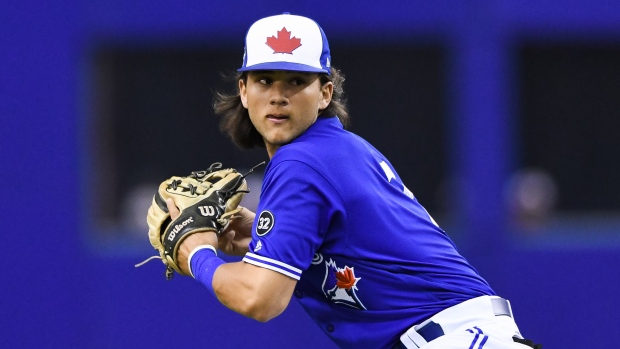 SS - Bo Bichette
Double-A stats: .286/.343/.453 with 11 HR, 74 RBI, 32 SB, 48/101 BB/K
The reason he’s here: Bichette didn’t hit .362 like he did in 2017, but that’s fine. When you’re four years younger than the league average and you’re putting up an OPS close to .800, your employers will be happy. Make note of the 25 errors at shortstop.
Atkins: “Bo has always had an aggressive, damage-focused approach at the plate and it was an adjustment for him at the start of the year as he adapted his approach to more advanced pitching. Especially over the second half of the year, he really hit his stride at the plate, while also showing a ton of value on the bases and in the field. His commitment to shortstop is undeniable and gives us great confidence in his future as an everyday shortstop.”

LF - Ryan Noda
Low-A stats: .256/.421/.484 with 20 HR, 80 RBI, 14 SB, 109/135 BB/K
The reason he’s here: All Noda does is get on base. Over two minor-league seasons, he’s posted a .451 on-base percentage. Turning 23 next March, the 2019 season is an important growth year for Noda.
Atkins: “Noda was a lineup cornerstone for a playoff team in Lansing this year, picking up where he left off from an impressive debut in Bluefield in 2017. He’s shown a very patient approach, with an elite ability work the count and take a walk, as well as hammer mistakes in the zone. He’s shown elite exit velocity relative to other hitters at his level.”

RF - Chavez Young
Low-A stats: .285/.363/.445 with 8 HR, 57 RBI, 44 SB, 58/100 BB/K
The reason he’s here: You won’t find Young on many prospect lists, but the Bahamian 39th-rounder out of the 2016 draft got on base, showed some pop, and swiped 44 bags for the Lansing Lugnuts.
Atkins: “Like Noda, Young has been a huge part of a productive Lansing lineup this year. We’ve very excited about his abilities as an outfielder, and he’s shown a dynamic offensive profile with an advanced approach at the plate and on the basepaths.”

OF Harold Ramirez
Double-A stats: .320/.365/.471 with 11 HR, 70 RBI, 16 SB, 27/88 BB/K
The reason he’s here: Taken off the 40-man roster last off-season, Ramirez had something to prove, and that’s exactly what he did with his best campaign since 2015 in High-A in the Pittsburgh Pirates’ system.
Atkins: “After some struggles in 2017, Harold made some mechanical adjustments to try to get the ball in the air more this year and it showed with very strong all-around performance at the plate.”

C Alejandro Kirk
Appalachian League stats: .354/.443/.558 with 10 HR, 57 RBI, 2 SB, 33/21 BB/K
The reason he’s here: A 19-year-old backstop out of Mexico, the Appalachian League was no match for Kirk, who put up a 1.001 OPS.
Atkins: “Kirk showed elite contact rates this year, along with very strong contact authority, a combination that made him one of the top hitters in the Appy league.” 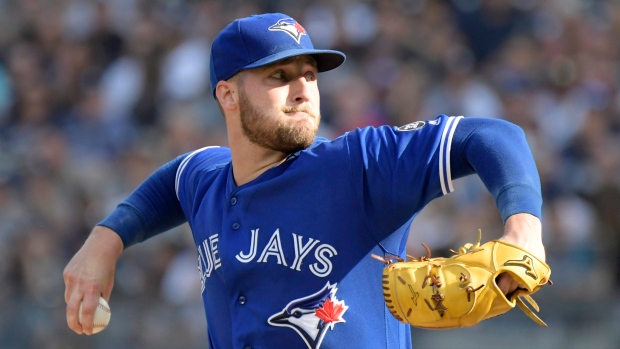 SP5 - RHP Eric Pardinho
Appalachian League stats: 4-3, 2.88 ERA, 50 IP, 37 H, 16/64 BB/K
The reason he’s here: Next to Nate Pearson, this is the pitching prospect to get excited about. There’s a ton of development left to go, but the early returns on the $1.4 million Brazilian investment are exciting.
Atkins: “Showed a very impressive ability to miss bats and generate soft contact this year, dominating as a 17-year-old in his first exposure to North American baseball. Eric’s feel for all of his pitches is extremely advanced.”

RHP Zach Jackson
Double-A stats: 2-3, 2 SV, 2.47 ERA, 62 IP, 29 H, 51/75 BB/K
The reason he’s here: The 6-foot-4 righty had an interesting season. The ERA and strikeouts are nice, but he walked 51 in 62 innings. Only 29 hits allowed was the key to his success.
Atkins: “While he continued to walk a fair amount of batters in his first Double-A exposure, he was an extremely effective reliever all year, using his breaking ball heavily to induce whiffs and weak contact in the air.”

LHP Travis Bergen
High-A stats: 0-1, 1 SV, 1.71 ERA, 21 IP, 16 H, 6/31 BB/K
Double-A stats: 4-1, 7 SV, 0.50 ERA, 35.2 IP, 26 H, 9/43 BB/K
The reason he’s here: Drafted in the seventh round in 2015 out of Kennesaw State University, the lefty was nearly unhittable across two levels, posting a combined ERA of 0.95. Bergen needs to be added to the 40-man roster this winter or he could be plucked in the Rule 5 draft.
Atkins: “Was able to move beyond some past injury issues and post an extremely strong relief season across a couple levels, pitching multiple innings at times and posting very strong swing and miss rates.”

LHP Jake Fishman
High-A stats: 2-3, 8 SV, 2.68 ERA, 57 IP, 46 H, 11/56 BB/K
The reason he’s here: Part of the Team Israel roster at the 2017 World Baseball Classic, the 30th-round pick in the 2016 draft now has back-to-back strong minor-league seasons on his resume.
Atkins: “Did an outstanding job of limiting walks and getting strikeouts and groundouts this year, helping Dunedin in 1-2 inning stints.”

TOP 20 PROSPECTS HEADING INTO 2019
A quick and dirty list of the top 20 names in the system and where they’re expected to start next spring: