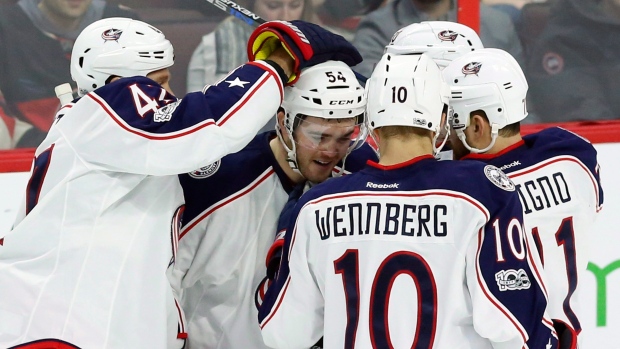 OTTAWA — Cam Atkinson made the right read, and it paid off with the winning goal.

Atkinson's second goal of the game at 1:09 of overtime gave the Columbus Blue Jackets a 7-6 win over the Ottawa Senators Sunday night.

The 27-year-old winger found himself on a breakaway after a shot by Senators captain Erik Karlsson missed the Columbus net and went around the boards out to Atkinson, who was at centre ice. Atkinson deked Mike Condon and slid the puck past the sprawled goaltender on the forehand to earn his team the two points.

"I was anticipating when he was about to shoot it and luckily he just missed the net and I got a breakaway and I just went to my go-to," Atkinson said.

"I thought we played pretty well and it was a good win."

Third-period goals by Lukas Sedlak at 1:50 and Matt Calvert at 2:21 erased a two-goal deficit for the Blue Jackets. Atkinson then scored at 10:50 to give Columbus a 6-5 lead.

"We wanted to respond in the third as fast as possible and although it wasn't exactly how we drew it up it was a good gut check by our team," said Scott Harrington, who had a goal and an assist for Columbus.

Atkinson's shot was more of a pop-up in the infield after being deflected, but as Condon tried to catch it above his head the puck hit his glove and went in.

"It was a tough goal, but those things happen. It was a routine play and (the puck) just got tipped up in the air and I made a mistake. It happens," Condon said.

Kyle Turris then tied the game 6-6 at 12:39 with the Senators on the power play.

Zack Smith and Mike Hoffman each scored twice for the Senators (25-15-5), with Mark Stone adding the other. Condon made 22 saves.

The two teams wasted no time once the puck dropped as there were three goals and three penalties before six minutes had run off the clock.

Smith scored the game's first goal when he banked a shot off Korpisalo's pad and in at 42 seconds.

Just 34 seconds later, and only 12 seconds after Cody Ceci took a hooking penalty, Foligno tied the game as he tipped an Alex Wennberg pass in behind Condon.

Smith scored his second of the game at 5:33 on a redirection. Curtis Lazar picked up the second assist giving him his first point of the season in his 25th game.

"That was different and I think a bit of that has to do with both teams having a bit of a busy schedule and playing back-to-back games and I think the mental fatigue kicks in," Smith said of the fire-wagon type hockey that was played.

"There's a few more missed assignments and mental errors. Neither team can use that as an excuse because they're both in the same boat, but realistically that's part of it."

After a bit of a lull, Harrington, from Kingston, Ont., scored his first goal of his career when his point shot eluded Condon at 10:18 and tied the game 2-2. His parents were in the crowd to witness it.

"It worked out well I guess. Hometown is only about two hours from here so I've got some cousins here, my sister lives here and family friends as well, so it worked out well," said Harrington.

The second period wasn't as explosive to start as the first, but there was an opening-minute penalty to the Senators and a power-play goal by Werenski at 56 seconds to give the Blue Jackets a 3-2 lead.

The Senators were able to retake the lead before the end of the period as Hoffman and Stone scored at 10:41 and 13:08, respectively. Hoffman scored again at 19:43 to give the Senators a 5-3 lead after two periods.

Notes: Casey Bailey and Mark Boroweicki were scratches for the Senators. Marcus Hannikainen, David Savard and Markus Nitivaara were scratches for the Blue Jackets…Senators forward Kyle Turris played in his 500th NHL game and became the 1,505th player in league history to reach that milestone…The Senators play the second of three consecutive home games when they host the Washington Capitals Tuesday. The Blue Jackets are in Brooklyn Tuesday to face the New York Islanders for the second of five straight road games.