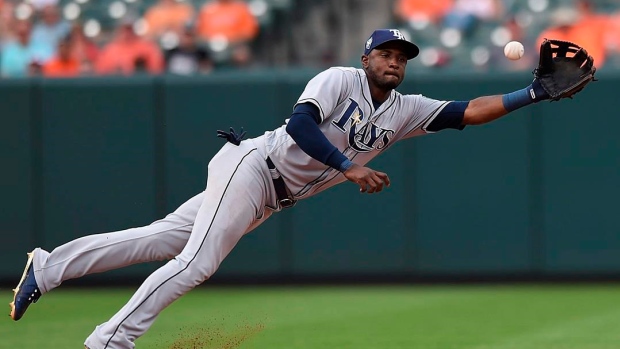 ATLANTA — The Atlanta Braves have signed Adeiny Hechavarría to fill a void at shortstop with Dansby Swanson still injured and Johan Camargo heading to Triple-A Gwinnett.

Hechavarría, a 30-year-old with his sixth team in three years, agreed to a one-year, prorated contract. He was in the lineup Friday and batting seventh against the Los Angeles Dodgers.

Camargo is hitting .222, a 50-point drop from last year when he finished with 19 homers with 76 RBIs. He lost his job as the everyday third baseman during the off-season when Josh Donaldson signed as a free agent, and the Braves grew tired of waiting for him to adjust to a utility role.

Swanson, the everyday shortstop, has missed 22 games with a right foot contusion and still has no immediate timetable for a rehab assignment, so Atlanta general manager Alex Anthopoulos had to move quickly with Camargo out of the picture.

The Braves did not get an offensive upgrade in Hechavarría, who was released this week by the New York Mets after hitting .204 with five homers and 18 RBIs in 142 at-bats. But Hechavarría has a better glove than Camargo.

"It's hard to find a legit shortstop this time of year," manager Brian Snitker said. "Alex did a great job in doing his homework and getting some help."

Camargo and left fielder Adam Duvall were optioned to Gwinnett with pitcher Bryse Wilson heading to Atlanta. Duvall has slumped recently with a .116 average in his last 13 games.

Camargo had yet to pack up his locker in the clubhouse, but Snitker hopes he can get his groove back at Gwinnett.

"He's going to play every day," Snitker said. "They'll move him around and keep him active and try to get his game back. He wasn't the same kid as we remember. It's not an easy role when you come to spring training and you had a good year. That being said, you still have to be able to adjust, adapt and be ready to go. He wasn't playing like we know he can."