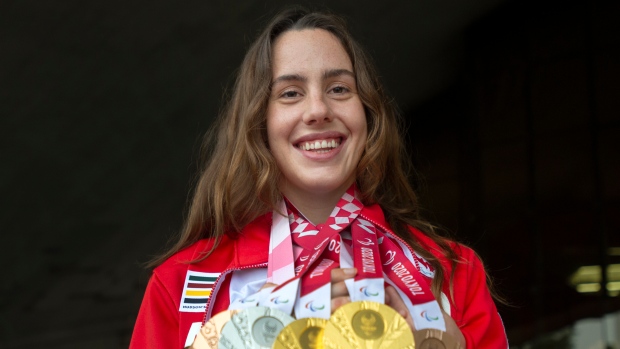 MONTREAL — The undisputed queen of the Tokyo Paralympic Games, Aurélie Rivard mentions it right off the top: she is still floating on a cloud two weeks removed from her experience in Japan.

Rivard, 25, of Saint-Jean-sur-Richelieu, Que., won an impressive five medals, including a pair of gold and one silver in para swimming. She now has 10 career medals from three Paralympic Games.

When combined with the four silvers from para-athlete Brent Lakatos of Dorval, Que., nine of Canada's 21 medals were won by Quebecers at the recently concluded games.

"I hadn't realized that. It's still fun to know. It's a great accomplishment, I think," Rivard said in a phone interview with The Canadian Press.

The Quebec swim star said she wasn't surprised to find herself on the podium so often in Japan, having trained hard in recent years to be at the top of her game.

"That's why I was training, there was no way I was going to Tokyo leaving things to chance," Rivard said. "I was training to improve my performance, to break world records, and to bring back as many medals as possible."

She said the medals in the S10 100-metre backstroke (a silver) and the 4x100m relay (bronze) were nice surprises, and that she was happy with the end results.

Rivard successfully defended two of her three Paralympic titles from Rio 2016, including the S10 100m freestyle and 400m freestyle. However, she had to settle for bronze in the 50m freestyle, a performance she still has difficulty with.

“It's a big disappointment for me. I was going there to win gold," she said. "There wasn't even a catch, it's my performance that is downright inexplicable."

She said she's not sure what happened, but it wasn't a mistake on her part. The day after the result, she did the same swim in training and went faster, adding to her frustration. But she said it served as a springboard for her victories in the 100 and 400 freestyle.

Her medal haul has led to comparisons with legendary Quebec para-swimmer Benoît Huot, who snagged 20 medals — including nine goal — over five Paralympic Games. Rivard says she doesn't have Huot's record in her sights.

"What Ben has accomplished over the past decade is unique in itself," she said. "And the longer it goes, the harder it will be to replicate. He will forever remain a legend in our (Para-swimming) community."

She said while Huot would be the first to want her to break his mark, it's not top in her mind.

"That being said, it's already a great honour to be compared to him, that my name is mentioned in the same sentence as his," she said.

Rivard said her medal haul in Tokyo is a proud moment.

"I find that after the year that we just went through, with the pandemic and everything, it's very gratifying to have been able to have such performances (in Tokyo)," Rivard said. "We were still limited in our training here in Canada, so these 21 medals there are even more special than those acquired four years ago."

Rivard will now take a few months away from the swimming pool to continue her studies in law at Laval University.

She plans to return to swimming in February 2022.

But she'll wait to decide whether she intends to be at the Paralympic Games in Paris in 2024.

"It's hard to say, because we've never been through a three-year Olympic cycle," Rivard said.

For now, she's content to take a break and say "yes" to things she's spent saying "no" to: seeing friends, family, relatives and enjoying life.

"I will know it's time to get back swimming when I start walking in circles around the house," she laughed.