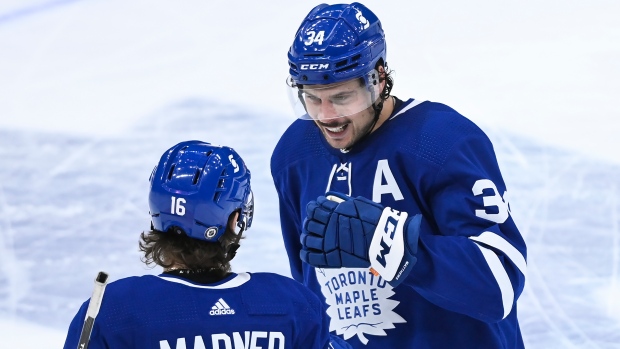 The Leafs held an optional skate at Scotiabank Arena on Monday. The New York Rangers held a full skate.

After winning his first Rocket Richard Trophy and finishing second in Hart Trophy voting last year, Auston Matthews is looking for more of the same this season.

"Continue to have that consistency every single night," Matthews said when asked about the next step in his career. "It's hard to do it night after night, and that's why the best players are the best players. I don't want to say it's easy, but it's easier to be good for a week or a month, but it's really hard to be good night after night consistently, so that's really all I focus on."

Matthews has consistently been a fast starter in the NHL. He has posted nine goals and three assists in five season-opening games.

"I wish he wasn't coming back tonight," New York Rangers coach Gerard Gallant said with a smile. "He's a great player, one of the top players in the game ... hopefully he's a little rusty, but I don't expect that."

Neither do the Leafs.

"Unbelievable, as usual," said defenceman Rasmus Sandin when asked how Matthews looks in practice. "I mean, going against him, how he gets his puck with him, nothing's changed, really. He looks more than ready ... He's a very competitive guy. He always gives at least 100 per cent."

Matthews potted 41 goals in 52 games last season despite not feeling 100 per cent physically. He underwent surgery on his left wrist in August to repair the lingering issue.

"I'm going to be rusty," Matthews said. "I'm just going to try and get out there and move my feet and play hockey and take care of the puck and just have some fun."

Auston Matthews opened as the favourite to win the Rocket Richard Trophy at +300. Despite missing Toronto's first three games, Matthews remains the favourite to lead the NHL in goals scored. Here is a look at the updated odds. #LeafsForever pic.twitter.com/j9rQK7Pw1B

The Leafs have only scored seven goals in three games so far and Sheldon Keefe warned his team not to take their foot off the gas just because Matthews is back.

"Really, the challenge ... is for us to continue doing the things we're doing," the coach said. "We can't change anything with Auston coming back in."

Matthews (199 goals in 334 games played) is poised to become the second-fastest player in Leafs history to score 200 goals behind only Charlie Conacher, who reached that mark in 317 games. Eighteen skaters in league history have scored 200 goals in 335 or fewer games with Alex Ovechkin (200 in 296 games) the only active player on the list.

Matthews will slot in beside good friend Mitch Marner, his linemate all last season, and newcomer Nick Ritchie.

"Of course, we know the chemistry that Auston and Mitch have," said Keefe. "I expect that to be evident right away."

Ritchie, Matthews and Marner have skated in four practices as a line, including on Sunday.

"Practice is one thing, but you don't play a great deal of five-on-five [work] in practice settings all the time so it will be a little bit different," Keefe acknowledged. "I'm anxious to see that group, that I've had in my mind all offseason, work together."

"Chemistry's felt good," said Marner. "[Auston's] been skating with us the whole time and we've been doing line stuff, so we've felt good. It's just making sure that, first game, we're not being too reckless with that puck and we're making the right plays, plays that are available, but not forcing anything."

Playing alongside centre John Tavares, Marner posted just one assist in the opening three games while Ritchie is still looking to get on the board. Despite a relatively quiet start, Keefe has faith that Ritchie can help fill the void created by the departure of Zach Hyman.

"He's done a lot of underrated things," Keefe said. "When he gets the puck very often the next play is going to one of our sticks. That is an underrated, but extremely important piece to play with good players. He consistently is moving the chains and giving it to the good players and getting into good spots."

Keefe also pointed out that Ritchie, who is still getting acquainted with the Leafs system and structure, posted a game high six hits on Saturday.

Sandin is off to a strong start with a pair of assists, including a beautiful setup on the Wayne Simmonds ice breaker Saturday night.

"Unbelievable," Simmonds marvelled. "I didn't do anything. I, honestly, just angled my stick and stood there."

"This year, coming into the season, I felt more comfortable," Sandin said. "I know everyone better, know the system better and you chat more with everyone on the team too so that makes me very comfortable out there."

Sandin has fired seven shots on net while averaging just under 17 minutes of ice time through three games. He averaged 14 minutes and 40 seconds of ice time in nine regular-season games last season.

Sandin was the last regular on the ice at the morning skate as he put in some extra work on his shot. He describes his one timer as "up and down" and is focused on improving that shot, in particular.

"It's something that I want to work on and use a little bit more and get my shots away quicker," said Sandin, who quarterbacks the second power-play unit. "I'll need to use it a little bit more ... Sometimes it's the right opportunity to take a one-timer, sometimes it's not so just got to read it and be comfortable with taking them."

The Leafs will play an American opponent for the first time since Aug. 9, 2020, when they dropped Game 5 to the Columbus Blue Jackets inside the playoff bubble in Toronto.

"It's going to be great to hear two anthems again," Marner said with a smile. "It will be fun to play a different team than the six we've played for however many days."

"It's been a long time," said Tavares. "You got to familiarize yourself with some of the players and some of the teams again."

So, what stands out about the Rangers?

"Well, they're different," Keefe said. "That's new and nice. They're a good team that's got a good balance of established and veteran NHL players, but also young guys that are very talented and skilled."

The Leafs haven't faced the Rangers since losing 5-3 at Madison Square Garden on Feb. 5, 2020. Matthews scored twice that night. Since then, New York has changed coaches with Gallant replacing David Quinn.

Keefe pointed out that Gallant has already put his stamp on the club.

"Forecheck and pressure is a big part of it, attack at the net, those are the things that stand out to me in terms of difference in style to the Rangers teams I've coached against in the past," Keefe observed.

After missing Saturday's game and Sunday's practice due to an illness, Justin Holl returned to the ice this morning and will be in the lineup tonight. Jake Muzzin, who missed Sunday's practice for maintenance, is also good to go.

Timothy Liljegren, who made his season debut on Saturday, will be the odd man out on the blueline.

The Leafs are looking to win their first three home games in a season for the first time since 2011-12.