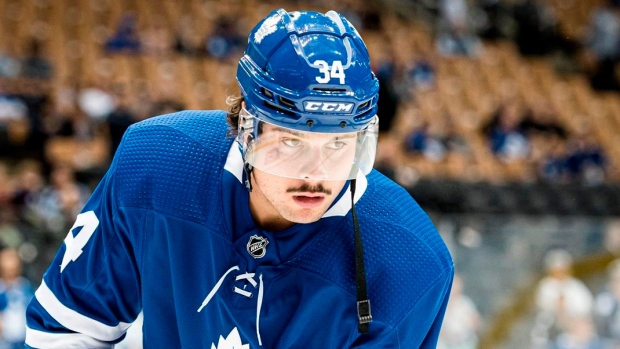 It’s been four weeks now since the National Hockey League hit pause on the regular season in response to the global COVID-19 pandemic, and Toronto forward Auston Matthews still can’t shake the feeling there’s more left for the 2019-20 Leafs to accomplish.

"There's obviously unfinished business, considering we've got 12 [regular season] games left to play [on the schedule], and then there were true races for spots in the playoffs," he said during a conference call with reporters on Thursday. "There’s unfinished business everywhere. But this is bigger than sport and there's nothing that we can really do about it. But obviously your mind wanders. Everybody would love to be playing hockey right now, but that's not the case."

Matthews has been waiting out the NHL pause in Phoenix with teammate Frederik Andersen, filling his days with workouts, video, and some good bad TV. He touched on those topics and more in the media session, including how he feels about being so close to the 50-goal milestone when the season stalled out.

Matthews amassed 47 goals through the 70 games Toronto was able to play so far, putting him one behind Alexander Ovechkin and David Pastrnak (tied with 48 apiece) for the NHL lead.

Matthews is already well past his previous career-high of 40 goals and would revel in the chance to catch a veteran like Ovechkin for a scoring title. But given the uncertainty surrounding when the NHL can resume, he’s appreciative just to be keeping such good company.

"It's pretty cool and humbling to be in the same conversation as a guy like [Ovechkin]," Matthews said. "Being in a scoring race with a guy like him, he's been a generational player and he's made a big impact beyond the game and led the way for lots of players and lots of guys. It's humbling, and hopefully we can get back to playing hockey and can compete again, that's what everyone wants to do."

That’s not to say Matthews hasn’t experienced a range of emotions tied to the stoppage, and its impact on his season in particular. There’s just a greater perspective he’s determined to keep on the whole matter.

"It's obviously frustrating and disappointing to see the season go on pause," he admitted. "But when you think about those kinds of achievements and accomplishments, being close to scoring 50 goals and stuff like that, it all kind of becomes irrelevant when you're talking about human lives and what's been going on around the world. I would love to be playing hockey right now and to be able to live normal life. But there are things bigger than sports. [Eventually] I’m looking forward to getting back on the ice and hopefully accomplishing some of those goals."

Keeping up with Keefe

When Leafs’ head coach Sheldon Keefe spoke with reporters on Tuesday, he admitted to binge-watching a lot of his team’s tape during this pause - and not much else.

That dedication to bettering the team comes as no surprise to Matthews, who has enjoyed a strong relationship with Keefe since he stepped behind the bench in November.

Keefe said he’s been in touch with players from afar and was encouraging them to use the unexpected time off productively.

"I think he kind of pinpointed the fact that he's been looking to use this moment and find different ways for the team to be better, areas of weaknesses and strengths and stuff like that," Matthews said. "I think that shows a commitment to being the best coach that he can be and obviously help the team as much as possible."

To be a more improved team whenever the NHL does resume, Matthews says the Leafs can start by looking within.

"I think for us, just trying to have more of a killer mentality in the way we start games [would be big]," he said. "No matter who we're playing, making sure that we're all ready. That should be taken upon the leaders to set that example. There are points when things weren't going well where we really didn't start [the way we should]. That showed a bit of an amateur side and that's all stuff that can really be fixed; it's more of a mentality than anything. We had our fair share of adversity, but in the long run, that kind of stuff builds character and leadership."

In the immediate aftermath of the NHL’s pause, the Leafs were told to stay put in Toronto for a period of self-isolation until more clarity from the league emerged.

Eventually, players were permitted to leave town, and Matthews immediately returned to Arizona. Andersen didn’t have another place to escape to, so Matthews made him an enticing offer.

"When we got word that we were good to go home if we wanted to, I went home and then he was stuck in Toronto for a couple of weeks," Matthews explained. "I was talking to him and invited him to come down here and get out. He was crammed in a condo downtown. [So far] staying together has been good. He's an extremely close friend of mine, so our relationship, it's just grown over the years and he's a big part of our team and I really enjoy spending time with him."

Matthews said part of his regime during the down time has been working on his shot, but he hasn’t yet asked Andersen to step between the pipes in practice.

"No, I wouldn't do that to him," Matthews laughed. "He’s not a street hockey goalie. He likes to play out anyway."

The two friends also have differing opinions on what qualifies as good TV - or, in some cases, good bad TV.

"The first [series] I watched was Love is Blind," Matthews said. "I think I watched it like two or three times, because I wanted all my friends to watch it. I wanted Freddie to watch it. And then another friend of mine was watching this Love Island show and turned me on to that. Freddie is not really a big fan of that one, he'll only watch a couple episodes before he leaves the room and goes somewhere else. I really don't know what the appeal is. It's pretty awful, but I'm just in deep now, so I can't really turn back."

There’s no guarantee of what the NHL will look like when it gears up again, but Matthews is staying prepared as if there will be plenty on the line for Toronto when the time comes.

"When you're at the point of the season we were at, you're extremely dialled in with 12 games to go," Matthews said. "And you're just kind of in that mental space where it's hockey every single day and so it's obviously tough that's not the case anymore. And you don't really have a picture of when it will all resume again, so trying stay ready and work on the things that you can."​

To that end, Matthews has been biding his time with a number of activities he hopes will be beneficial in a return to action.

"I've been watching some video, watching clips, and trying to stay as active as possible while obviously respecting the social distancing and the rules that apply," he said. "Been taking advantage of it like the off-season. I've been shooting pucks and stickhandling. I’ve got free weights, I’ve got a sports court being built right now [at my house], I've got rollerblades. Trying to do everything I can to stay in shape and try to not lose that focus."

Should the NHL bypass its remaining regular-season dates and go directly into a playoff based on where teams were at the time of the pause (Toronto was sitting third in the Atlantic Division and set to face the Tampa Bay Lightning in a potential first-round series), Matthews said the goal would be for the Leafs to lay their playoff demons to rest after being bounced from the postseason in round one each of the past three years.

"I think that's obviously been a goal since our first year [to win a series]," he said. "It’s no secret we've had three years of the same result. You'd love to get to that point again and change the whole narrative. We've been working our way to get to that point, but for now we've got 12 regular-season games and obviously there's a lot of unknown about when it does resume what the situation is going to be. I guess until that happens, it's tough to talk about the hypotheticals. You don't really know what to expect."

Given the COVID-19 pandemic, the NHL could follow the NFL’s lead and hold a virtual draft later this spring, robbing draftees of a chance to receive their new team’s jersey in person.

As the first-overall pick by Toronto in the 2016 NHL Entry Draft, Matthews knows how unique it is to be a top draft choice, and would feel for others denied that full experience.

"[it’s] incredible, and obviously for guys that will be the first couple picks, hearing your name called and going up there and getting your jersey, it's all extremely surreal," he said. "It’s an experience you dream about as a kid. If that's not the case, it's going be tough, but I think in the long run, they're going to be good players in this league and hopefully they'll have more memories and experiences to cherish and [won’t] worry about it too much."