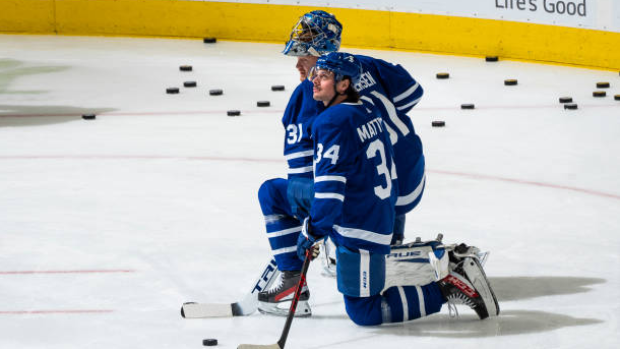 The Toronto Maple Leafs will have both Auston Matthews and Frederik Andersen back in the lineup as they look for a three-game sweep of the Edmonton Oilers on Wednesday.

The Maple Leafs have shut out the Oilers in consecutive games, first with Jack Campbell in net, then Michael Hutchinson.

Head coach Sheldon Keefe said it was still to be determined whether Campbell, who missed Monday's 3-0 win with an injury, is healthy enough to serve as backup.

Winger Alex Barabanov will exit the lineup for Matthews, while Keefe added William Nylander will play after missing practice on Tuesday.

All things being equal, this would be #Leafs projected lineup vs. EDM tonight:

Matthews missed the team's previous two games against the Oilers due to a wrist injury. He leads the NHL with 18 goals and has 31 points in 20 games this season.