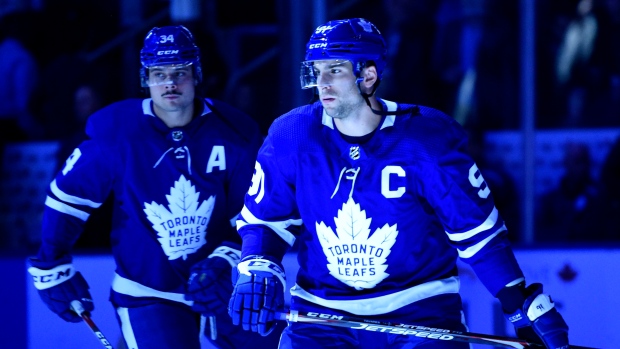 The Maple Leafs held a Zoom media availability on Thursday before Game 3 against the Blue Jackets.

The Blue Jackets system is designed to frustrate highly skilled players, but after the Leafs got shut out in Game 1, Auston Matthews and John Tavares didn't get frustrated, they got even.

"Any time you get two guys like that that are playing as hungry as they are and as committed as they are [it means a lot]," said coach Sheldon Keefe. "They had more than enough opportunities to score even more than they did and there were a lot of other intangibles that led the way for us as well."

Matthews, who was credited with two hits in Game 2, was a physical presence on Tuesday night and opened the scoring late in the second period. Tavares, meanwhile, didn't get flustered after a flurry of chances failed to fall for him early in the game. He finally cashed in on his eighth shot. Both centres played a well-rounded game, doing some of the heavy lifting needed to earn scoring chances.

"Just upping our compete level," Matthews said when asked how Toronto managed to rack up 39 shots in Game 2. "Getting to the net, dirty areas and trying to get on the inside where we can beat guys to the net. I thought we came out with a strong push to start the game and I think just the communication factor was there for us and just full effort throughout the lineup."

Tavares singled out Matthews, who hit a crossbar and fired six shots on net in Game 1, for once again answering the bell.

"Great play by Mats to break the ice for us," the Leafs captain said. "It was a big goal and something he always does for us. As a team we just kind of fed off one another and he led the way."

GAME DAY SKATE: BarDown's @LucaCelebre21 is joined by TSN Maple Leafs reporter @markhmasters to discuss how Jake Muzzin's absence will affect the rest of the defence in Game 3, and share his thoughts on how Auston Matthews has been 'locked in' throughout the series so far. pic.twitter.com/DrvPWIFave

After failing to register a shot on goal in Game 1, Mitch Marner bounced back with five in Game 2. While he didn't pick up a point, the shifty winger was a lot more noticeable. Why?

"I was just a lot more competitive with the puck, on the puck, a lot more dialled into my battles and being better consistently all over the ice," Marner explained.

Keefe sparked Marner by reuniting him on a line with Matthews and Zach Hyman.

"The chemistry just kicked right back, and we were making plays," said Marner. "We worked the puck nicely around. We were using our speed."

The Blue Jackets forecheck, a major source of their offence, was a non-factor on Tuesday night. What did the Leafs do well to neutralize that?

"Structurally, both forwards and defencemen were really good at making themselves an option," said defenceman Justin Holl. "So it felt like we always had an option to relieve pressure when they did come with a lot of steam."

It was actually the Leafs forecheck that made the difference in Game 2.

"We were doing a better job up ice in their half of the ice," Keefe observed. "As a result, most of the time when it entered our half of the ice they were in line changes and not forechecking as a full unit. That makes it a lot easier for us."

The Leafs are expecting the Blue Jackets to get back to their bread and butter tonight.

"I'm fully expecting they will be a whole lot better today," Keefe noted. "We'll have to be better at the same time."

The Leafs power play failed to convert on five opportunities in Game 2, but it did generate 11 shots.

"When you're oh for five on the power play you don't feel great about it and you know you need to be able to cash in there," Keefe acknowledged. "As you go back through the video and really break it down, we liked a lot of things about our process. We thought we entered the zone very well. We spent a lot of time in their end and we had six very good scoring chances, so the process, we really liked, and we think if we get some of those similar type of looks they will go in for us."

Toronto also missed out on its lone power-play chance in Game 1.

The Leafs are the designated road team for tonight's game, which means they don't have access to their own dressing room. However, they seem more than satisfied with the new digs: the Toronto Raptors room.

"That's kind of cool and unique," Keefe said. "We talked about that this morning, there's been lots of winning that's gone on in that room and hopefully we can get some of that to rub off on us."

With Jake Muzzin out, will Keefe go with seven defencemen tonight?

"I've made the decision, obviously, but I won't tell you this morning," he said. “You'll find out after warm-up."