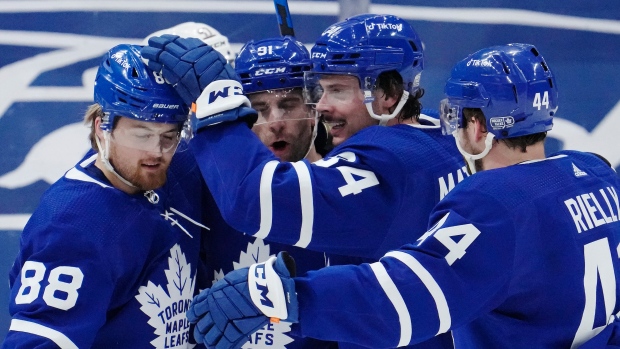 TORONTO — The Toronto Maple Leafs mixed up their line combinations in the hopes of harvesting a more balanced attack. Still, the familiarity of their top players performing together on the power play produced a shootout win Wednesday.

The Maple Leafs still needed shootout goals from Jason Spezza and Auston Matthews to score a 4-3 victory over the pesky Anaheim Ducks, who overcame a two-goal deficit in the second period to send the game into overtime before an empty Scotiabank Arena because of provincial COVID-19 restrictions.

Mitch Marner, William Nylander and John Tavares scored in man-advantage situations to push the Maple Leafs (26-10-7) out to a two-goal lead in the second. But riding a solid 41-save effort from goalie John Gibson, the Ducks hung around to gain a point.

The Maple Leafs outshot their opponents 44-20 and had a whopping 75 shot attempts at the Anaheim goal with 14 misses and another 17 blocked.

"There were a lot of stoppages, so it became a little more challenging," said Toronto head coach Sheldon Keefe when asked about the first game with his new line combinations. "We're also trying to get our fourth line going at the same time.

"So we got three lines that we really moved around. You're trying to get some traction and that group some chemistry."

Keefe aimed to place Matthews, Marner and Nylander on separate lines. So Matthews centred Michael Bunting and Ondrej Kase. Marner skated alongside captain Tavares and Ilya Mikheyev. Nylander was the right side of David Kampf and Alex Kerfoot.

"I don't think it really bothers anyone," Tavares said. "There is a lot of chemistry in this locker room, and I think everyone is ready to play with anyone at any time.

"So this is something that you can definitely work with."

The three power-play goals gave the Maple Leafs 34 for the season. Only the Colorado Avalanche and St. Louis Blues had scored more man-advantage goals entering play Wednesday with 37 and 35, respectively.

Tavares put Toronto in front 3-1 with a 5-on-3, slamming in a Marner pass. But the Ducks stayed close because as the second penalty expired to Jakob Silfverberg, he jumped out of the box to score on a 3-on-1 rush.

The Ducks then received the game-tying goal forward Vinni Lettieri with 6:37 remaining in the third when he redirected Kevin Shattenkirk's point drive.

The Ducks arrived on a roll by opening their five-game road swing with impressive victories against the defending-champion Tampa Bay Lightning and Boston Bruins.

Anaheim managed to snatch an early 1-0 lead with a fluky goal. Maple Leafs fourth-liner Pierre Engvall attempted to sweep away the puck from the Toronto crease, but his clearing attempt bounced off linemate Spezza and into the goal.

Anaheim centre Sam Steel was given credit for the goal.

Marner scored for the fourth straight game with a bullet one-timer from 36 feet. Nylander converted a Tavares pass from behind the net for a 2-1 lead. The go-ahead goal was Nylander's 17th of the season in his 39th game, matching the 17-goal output in 51 games last year.

In the first, the Maple Leafs lost defenceman Timothy Liljegren after he fell awkwardly and hit his head while trying to dump the puck into the Anaheim end. He was kept out of the game as a precautionary measure.