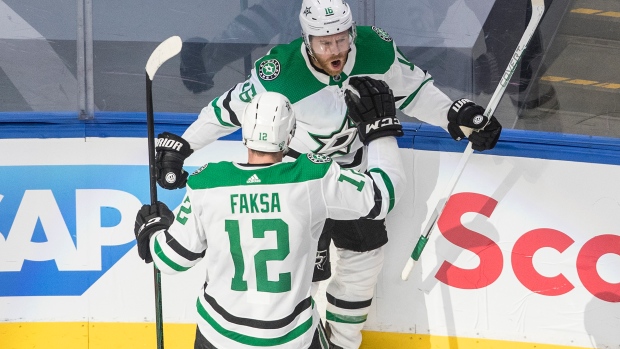 Joe Pavelski and his teammates sat down for late-night dinner after a playoff loss with almost no one thinking about hockey.

The veteran of 146 NHL playoff games had never experienced that before.

Conversations in between forkfuls weren't about the Dallas Stars losing momentum or the Colorado Avalanche getting back in to the second-round series. Instead, while they skated on amid postponements of NBA playoff and Major League Baseball regular-season games to make a statement against racial injustice, players discussed what they could do next and set the table for their own two days of protest.

“It wasn’t about the win or the loss at that moment,” Pavelski said. “We’re in this bubble and we’re together and, for me, it’s been good being around teammates, other competitors and learning a little bit more, hearing and being a part of it. You try to educate yourself along the way, but there’s always more to come, for sure.”

NHL players want that conversation to continue, and they want to get back to competing for the Stanley Cup. After being the final teams to play before the break, Colorado and Dallas will be the last to resume when they face off Sunday in Game 4 (6 p.m. EDT, NBC Sports Network).

Players on either side shared doubts and regret about playing Wednesday night given the tenor around the U.S. and the example set by players in other leagues. Avalanche MVP candidate Nathan McKinnon said postponing two days of games spoke loudly and players are “doing our best to make up for it” after being a day late to react.

Now, they're ready to play.

“There were some strong words said a couple days ago,” Stars captain Jamie Benn said. “A couple days to reflect here and we’re definitely looking forward to (Sunday) but obviously knowing there’s a lot going on in this world.”

The outside world hit closer to home for Pavelski, a Wisconsin native whose off-season home in Madison is a couple of hours away from Kenosha, where a police officer shot Jacob Blake in the back seven times, leaving the 29-year-old Black man paralyzed. Yet as demonstrations built up Wednesday, Pavelski said the rhythm of preparing for a game and losing focus in competition made Colorado and Dallas players shelve real-life talk until afterward.

“You see on social media all game day of teams (in other leagues) postponing,” MacKinnon said. “But there were already games going on, so we didn’t really know what to do. It was a tough situation.”

Three days removed from that, they eased back in to talking hockey and the adjustments necessary in a playoff series. With the Stars up 2-1, that falls mostly on the Avalanche, who are expected to again be without injured forwards Joonas Donskoi and Matt Calvert, defenceman Erik Johnson and goaltender Philipp Grubauer.

Injuries are nothing new for Colorado, but it's still an uphill climb that could start with another step in Game 4.

"Down 2-1, it’s a huge one," MacKinnon said. “We know we’re a good enough team to win. Obviously having those injured guys in our lineup helps. We were hurt all season. We don’t want to be hurt. But we have no choice but to put our best foot forward and go out there and battle.”

The New York Islanders and Philadelphia Flyers in the East and Vegas Golden Knights and Vancouver Canucks in the West will be playing the second half of a back-to-back in each series. Three of those teams could split the goaltending duties over the weekend.

Islanders coach Barry Trotz could use Semyon Varlamov and Thomas Greiss because of the short turnaround to Game 4 (8 p.m., NBC) and isn't worried about either one.

“Any decision make at the goaltending (position) I feel pretty comfortable all the time,” Trotz said. “Both our goaltenders are experienced, and they’re great pros and they’re able to not look at what happened last game. They just look and prepare for the game ahead.”

Vegas Golden Knights coach Peter DeBoer has been preparing all along to use Robin Lehner and Marc-Andre Fleury in goal during the playoffs. Game 4 against the Vancouver Canucks (10:30 p.m., NBC Sports Network) is another opportunity for that.

“The tighter the schedule, the more back-to-backs, the more your depth comes in to play,” DeBoer said. "That’s at all positions.”

The Canucks are deep up front but will ride goalie Jacob Markstrom as far as he'll carry them. The 30-year-old Swede has started all 12 of Vancouver's games, played 727 minutes and faced by far the most shots of anyone in the playoffs.

Markstrom's only time on the bench came in the final eight minutes of Game 1 after giving up five goals in a Vegas onslaught. A break in the schedule can't hurt, though coach Travis Green brushed off concern about Markstrom having anything wrong.

“He’s fine,” Green said. “But a couple days for Marky were probably beneficial.”