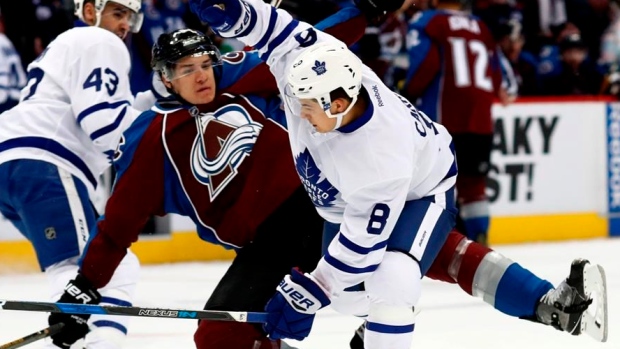 Two seasons ago, in a move I will endorse until the end of time, the Buffalo Sabres decided to throw the 2014-15 regular season away to gun for the highly coveted 30th position in the Connor McDavid/Jack Eichel draft. The 30th position, under the lottery odds at the time, guaranteed that the team finishing last would draft no lower than second, ensuring that one of the two superstar teenagers would become Sabres property.

The Sabres bordered between passively and actively trying to lose as many games as possible, dressing a lineup on most nights that had basically one line of talent and, when compared to teams around the league, zero punching power.

That same year, the Arizona Coyotes embarked on a tremendous trade deadline fire sale, actively entering the draft lottery race mid-year. The Coyotes were so terrible down the stretch that they nearly caught the Sabres for last overall – they ended up finishing just two points ahead of Buffalo in the standings, but slid to third overall in the draft and out of the McDavid/Eichel sweepstakes after the Oilers won the lottery.

What am I driving at here? Well, for one, we have a baseline for futility – we know that when teams are probably not trying to win many games, we should expect to see a goals-per-game rate of around 2.0 (the league average is about 2.7) and maybe a -100 or worse goal differential.

Let’s bring in the 2016-17 Colorado Avalanche. No one expected this team to be super competitive this year, but I don’t know that anyone had them earmarked for such an abysmal start to the season. Surely coaching turnover so late in the off-season didn’t help things, but a lack of forward depth and some injuries to the blueline have really crippled performance.

So much so that the Avalanche this year look like a couple of the tank teams from the 2014-15 season. Eerily similar, in fact.

I went and pulled goal rates and differentials for every team over the last seven seasons to highlight just how bad things have been under first-year head coach Jared Bednar. Here’s how Colorado compares to teams of the past (note: 2012-13 and 2016-17 seasons are pro-rated to make direct comparisons):

That is how bad things are right now in Colorado. They are one of four teams on pace to enter the “100 goal or worse” pantheon, which is almost uncharted territory. It’s worth repeating that though the Avs – like many other teams on this list – also stink in terms of defending the run of play. Their ugly goal differential is primarily driven by an offence that can’t buy a goal in the offensive third.

Let’s look at this another way, focusing solely on goal scoring. The results will be somewhat collinear, but I think it hammers the problem home with this year’s Avs:

So from a goal-scoring pace, only the tanking Sabres expect to be less productive.  This seems to have happened overnight in Colorado – the Avalanche have always bounced between average and poor team over the last decade or so, but their goal scoring has never been this dire. On a rate basis, we are talking about an order of magnitude difference from prior periods: 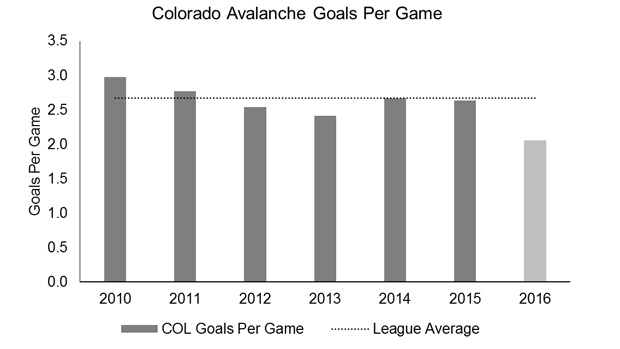 As you might have guessed, the goal-scoring epidemic seems to have hit every single Avs skater, especially at 5-on-5. In fact, the Avs have just one skater – Matt Duchene – with more than five goals this year. Remember, we are almost halfway through the season. The defence hasn’t been able to unburden any of the scoring from the forward group either – the blueline has a total of six goals on the year, with Tyson Barrie’s pair leading the way.

It’s strikingly obvious that the team needs more goals from highly compensated forwards like Nathan MacKinnon (five), Jarome Iginla (three), Carl Soderberg (three), and Gabriel Landeskog (two). But, a large part of the issue seems to be that the team rarely finds itself in the offensive zone to begin with, so finding opportunities to really generate and sustain attack is limited.

The defence, surely, is somewhat to blame here – the blueline struggles mightily to exit the defensive zone cleanly, and because they can never sustain possession, it makes every shift a war of attrition, with the Avs fighting to keep the lamp from lighting behind goaltender Semyon Varlamov.

Regardless of how you apportion blame, it’s clear that the Avs are woefully underachieving. It’ll be interesting to see how quickly the front office decides to pull the parachute on the year and start selling off assets. My guess is this team is headed into a full-blown rebuild, and considering the state in which the prior regime left the roster, it’s hard to blame them.