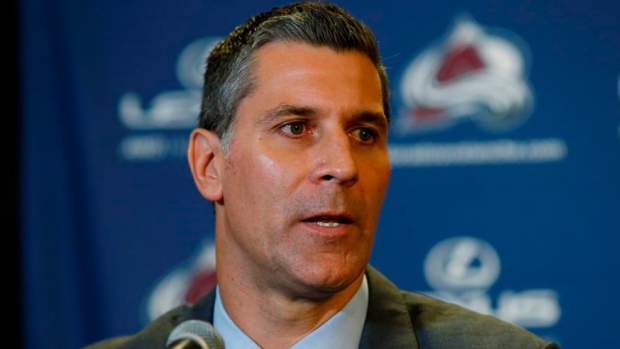 DENVER — Jared Bednar never got a shot in the NHL as a player but he's getting one now as a coach.

The Avalanche on Wednesday formally introduced Bednar, who was hired two weeks ago to lead Colorado after spending years in the minor leagues as a player and as a coach.

"I haven't been in a rush to get to this point in my career," Bednar said. "I was hopeful this opportunity would come. I hadn't stopped believing in that."

Bednar succeeds Patrick Roy, who abruptly resigned as head coach and vice-president of hockey operations on Aug. 11. With Roy's departure coming six weeks before the start of training camp, the team had to move quickly to find a replacement.

"We knew we didn't have the luxury of interviewing 20 candidates, but we tried to put a good group of candidates together," said Joe Sakic, the team's executive vice-president and general manager. "Usually you have one or two interviews after, but we didn't have that luxury."

Without the benefit of time, Sakic sought input from around the league and became convinced Bednar was the best fit for Colorado's young core.

"There were a lot of phone calls to different people that know him and coached against him," Sakic said. "The message was consistent."

The 44-year-old Bednar's path to the Avalanche began with an unspectacular minor league playing career. He scored 61 goals in 434 games for two different teams in the ECHL, had one goal in 74 AHL games and three more goals in 74 games in the International Hockey League.

He never got an NHL call-up.

"Probably didn't come very close," Bednar said. "I was just kind of a bubble player, a role player, but I was never really considered a prospect. It's disappointing because you work your whole life to be a player in the NHL."

He spent his last two years with the South Carolina Stingrays of the ECHL and found a second hockey life there at the end of his playing days.

"I started coaching and realized how much I loved it," he said. "I've been a more dedicated coach than I was a player."

He began as an assistant with the Stingrays in 2002 and became the club's head coach in 2007. He led the Stingrays to the conference finals in his first year, and they won the Kelly Cup in his second year.

He jumped to the AHL in 2011 with Peoria, where he spent two years. He took over the Columbus Blue Jackets' affiliate in Springfield in 2014 and guided the Lake Erie Monsters to a Calder Cup title this year.

His success in the minors helped him land the job with the Avalanche.

"I put value in winning a championship," Sakic said. "It's hard to do that in any league."

Things have moved fast for Bednar over the past two weeks. His wife, Susan, and their children stayed in Cleveland while he hopped into his truck for the move to Denver.

"I drove because I had some stuff I wanted to bring and it gave me some time to think," he said.

His biggest realization? That finally reaching the NHL is not the end of his journey.

"Being the coach of the Avalanche isn't the be-all, end-all for me, it's the success I want our team to have," he said. "Getting here is certainly achieving something but it's what you do when you're here that's more important."