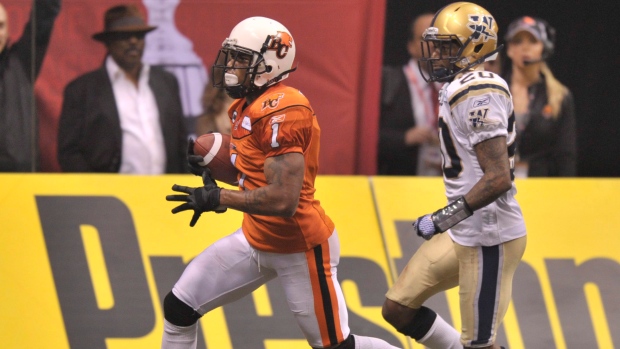 A B.C. judge heard oral arguments Tuesday about whether a lawsuit filed by former B.C. Lions wide receiver Arland Bruce III against the Canadian Football League should proceed through the courts or be dismissed because the league’s labour agreement covers health and safety issues.

It’s unclear when the judge might rule on the Bruce pre-emption argument, lawyer Robyn Wishart told TSN in an interview. The decision that may set a precedent for another lawsuit against the CFL filed in Ontario.

In the Ontario case, which was filed in May 2015 in Ontario Superior Court and seeks $200 million in damages, a group of former CFL players and their families claim the league didn't do enough to warn players about the long-term risks of brain injuries from playing football and suffering repeated concussions.

Hall of Fame linebacker Alondra Johnson, who starred for the Calgary Stampeders, and Dennis Duncan, a former Ottawa and Montreal running back, are among the former CFL players who have recently joined the litigation, Wishart said.
The CFL has denied the allegations and has argued that health and safety issues are pre-empted from litigation because of the league’s collective labour agreement with the CFL Players’ Association.

The Ontario lawsuit was originally filed by Korey Banks and Eric “The Flea” Allen.

Banks is a former defensive bank who played for Mississippi State. Banks played in the CFL from 2004-13 for Ottawa and B.C. He signed a contract with Winnipeg in 2014, but was later released and now lives in Georgia.
Allen, who died in October, played college football at Michigan State and was drafted by the NFL's Baltimore Colts. Rather than signing with the Colts, Allen agreed to a contract with the Toronto Argonauts and played for the team from 1972 to 1975.

Both Banks and Allen required hospitalization to deal with concussion-related medical problems, the lawsuit says.

Allen’s family is continuing with its legal claim against the CFL, Wishart said.

According to court papers obtained by TSN, the lawsuit seeks class-action status and has been filed on behalf of all retired CFL players since 1952.