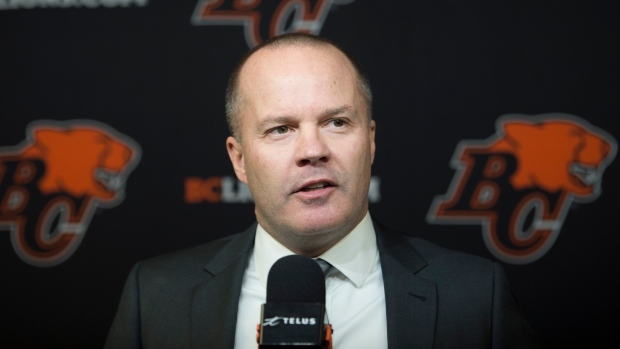 VANCOUVER — B.C. Lions head coach Rick Campbell has settled on a staff for 2020.

Campbell, who the Lions hired in December to replace the departed DeVone Claybrooks, unveiled his staff for the upcoming season. Claybrooks was fired after just one season as B.C.'s head coach after compiling a 5-13 record in 2019.

Campbell, who'll also serve as B.C.'s defensive co-ordinator, hired Jordan Maksymic as the club's offensive co-ordinator. He held the same post last season with Edmonton and will be reunited with Lions quarterback Mike Reilly, who was the CFL's outstanding player in 2017 while with the Eskimos.

O'Brien enters the coaching ranks after six seasons as a CFL quarterback. He was a member of Ottawa's 2016 Grey Cup championship squad and Lions in 2019.

Don Yanowsky, who has spent nearly 40 years in coaching, is the special-teams co-ordinator. He's coming off a stint at Texas-El Paso (UTEP) where he ran special teams and coached safeties.

Ryan Phillips, who helped B.C. win two Grey Cups in the club's secondary, returns for a second season as defensive backs coach. The native of Seattle spent 12 seasons with the Lions and stands second in all-time interceptions (47).

Leroy Blugh, a 2015 Canadian Football Hall of Fame inductee, will serve as B.C.'s defensive line coach. He spent the last six seasons with Ottawa and in 1996 was the CFL's outstanding Canadian.

Travis Brown begins his first season as B.C.'s linebackers coach. He had the same role with Edmonton the last two seasons.

"I am very excited to get this staff locked in for 2020 and to be able to hit the ground running for the new season," Campbell said in a statement. "This group has an excellent mix of experience as well as some great up and comers in the coaching ranks."