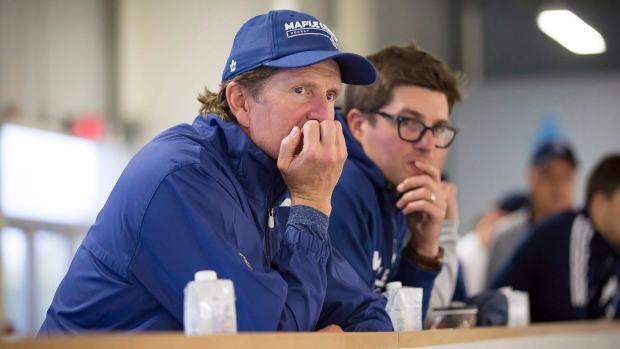 TSN Toronto reporter Kristen Shilton checks in daily with news and notes on the Maple Leafs. The team held an 11 a.m. practice at MasterCard Centre on Friday.

Maple Leafs head coach Mike Babcock didn’t know there were theories mounting in the media about a rift between him and general manager Kyle Dubas until someone else alerted him to the news earlier this week.

That's how Babcock discovered that his comments from last week about the Leafs’ lack of depth compared to the NHL’s top teams like Tampa helped fuel the speculation. He did his best to diffuse the perceived issue on Friday

“Whatever people speculate or think, I don’t think that’s the case,” Babcock said after the Leafs practice. “I know Dubie and I talk all the time. We’ve talked about this since this happened. That relationship is so important. There’s going to be a [expletive] storm once in a while. There just is. You’d like to say everything perfect and maybe sometimes you don’t, but the intent [matters].”

Babcock never expressly denied tension with Dubas over the course of lengthy answers on the topic, but wanted to be clear he wasn’t trying to attack any one person in his reflection on the Leafs’ personnel.

“If there was any slap at anyone [in what I said], it sure wasn’t intended. That’s not what I meant to say,” Babcock said. “We have to keep improving our depth. That’s what Dubie is trying to do, that’s what [senior director of player evaluation] Jimmy Paliafito is doing, our pro scouts, myself, [Toronto Marlies’ head coach] Sheldon [Keefe] developing players [in the AHL]; we’re all trying to do it so we can get to be like these [other] teams.”

This is the first season Babcock and Dubas have worked together in their current roles, since Dubas took over for Lou Lamoriello in May. Babcock hasn’t always eased the first-time NHL GM into the fire.

It takes time, according to Babcock, before a coach and GM get into a good rhythm. While the Leafs’ tandem may not be there yet, the coach isn’t letting this blip distract from building a better rapport for the future.

“Dubie and my relationship isn’t as good now as it’s going to be four years from now,” Babcock explained. “Mine with [Detroit GM] Ken Holland wasn’t as good my first year as it was in my 10th year, [Anaheim GM] Bryan Murray in the first as it was in my third. It’ll just make [Dubas and I] better.”

Slowly but surely, the Leafs’ most important injured bodies are getting closer to a return.

Travis Dermott participated in his first practice on Friday since injuring his shoulder on Feb. 27, while Jake Gardiner took part in an on-ice session with Leafs’ skills coach Darryl Belfry. Joined by Dermott for the first half of that workout prior to the Leafs’ team practice, it was the first time the media had seen Gardiner go through a lengthy 40-minute session since being ruled out with a back injury, also on Feb. 27.

“That’s a huge deal for us,” Babcock said of their progress. “On the backend, there’s no question, those guys are both good puck movers, good players, and we miss them. In the National Hockey League, we talk about all these positions we want, you need a goalie, but you need a D.”

Dermott had been training for over a week on his own and with skating consultant Barb Underhill before getting clearance to return to practice. He was wearing a red non-contact sweater throughout on Friday, but didn’t shy away from getting involved along the boards and taking a few bumps.

He said afterwards that, at least conditioning-wise, he couldn’t ask to feel much better than he does now.

“I feel really good,” he said. “The trainers here have been working me pretty hard in the gym. I was out there skating and felt a lot better than I would in a regular practice, so I don’t know if I’m in better shape or just excited to be back with the guys, but I feel good.”

The 23-year-old declined to get into the specifics of what occurred when Edmonton Oilers’ forward Brad Malone flattened him with the injury-causing hit back in February, but said he isn’t harbouring any ill will.

“It was just kind of an awkward play where I fell on my shoulder kind of weird. It was just a hockey play,” he explained. “I got all these messages saying, ‘[Malone] should have been suspended’ and all this stuff. I don’t know. It was a weird play. I’m not going to hold any grudges on anyone. I’ve been hit way more awkwardly and nothing has happened.”

Dermott said he’ll need a couple more practices before he’s ready to get back in a game, perhaps in time for next Saturday’s tilt in Ottawa. And if all goes well, Dermott hopes Gardiner isn’t too far behind him.

“He’s moving really well,” Dermott said. “I’ve seen him progress exponentially. I’m excited to hopefully have him back not much longer after I come back.”

On Friday morning, Ottawa Senators owner Eugene Melnyk told radio station CFRA in Ottawa that through Toronto’s recent rebuild, “mistakes were made, because someone forgot about defence” and opined that the team will have a tough time winning a championship with their current blueline.

“That’s kind of funny, actually,” said Morgan Rielly. “I don’t know. I don’t have much comment on it, except that it’s pretty funny.”

Forward Zach Hyman was similarly nonplused, realizing such targeting comes with the territory of playing in Toronto.

“I didn’t even hear about it. It’s just white noise in the background,” he said. “We don’t really think about what other people say about our team. We just go out there and play our game and keep going.”

Also declining to comment was Babcock, other than to point out that, “We have an unbelievable owner here in Larry Tanenbaum and we’re blessed to have him."

William Nylander and Martin Marincin were both absent from Friday’s practice, battling the flu. While Marincin’s status for Saturday’s game against the New York Rangers wasn’t commented upon by Babcock, the coach did say he expects Nylander to play.

“He wasn’t feeling good, hadn’t been feeling good in the previous games, he played anyway,” Babcock said. “And we just felt it was best to give him the day today.”