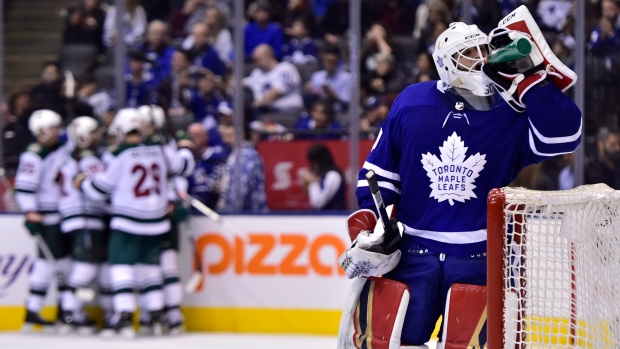 With Frederik Andersen and Garret Sparks both sidelined, Toronto Maple Leafs head coach Mike Babcock said on Thursday the Maple Leafs may look to add another goaltender less than a week after acquiring Michael Hutchinson from the Florida Panthers.

Hutchinson started Thursday's 4-3 loss to the Minnesota Wild, stopping 30 of 34 shots in his first game since being traded for a 2020 fifth-round pick on Saturday. Both Hutchinson and Kasimir Kaskisuo were recalled from the AHL on emergency loan on Thursday with Sparks being evaluated for a concussion.

Babcock said the team wants to see Kaskisuo continue to develop in the AHL and could elect to acquire another goaltender in order to send the 25-year-old back to the Toronto Marlies.

“I don’t know what’s going on, we were just talking about maybe finding another goalie,” Babcock said, per the Toronto Star. “We’d like (Kaskisuo) to get playing, we don’t want him to be sitting around. So maybe we’ve got to find another goalie and go from there.”

Babcock said the Maple Leafs' plans will depend on the status of Andersen, who has started 30 of the team's 40 games this season. Andersen remains day-to-day with a groin injury and was placed on injured reserve retroactive to Dec. 23 on Thursday, meaning he could still return for Saturday's game against the Vancouver Canucks.

“He was out again today,” Babcock said. “Everything is moving along according to our medical people that way, but it is what it is. I thought Hutch gave us an opportunity (against Minnesota), that’s all you can ask of him. Then we’ve got to do our part.”

The Maple Leafs were dealt a major blow to their goaltending depth prior to the season when both Curtis McElhinney and Calvin Pickard were claimed off of waivers on the same day.

Toronto sits second in the Atlantic Division with a 26-12-2 record this season.