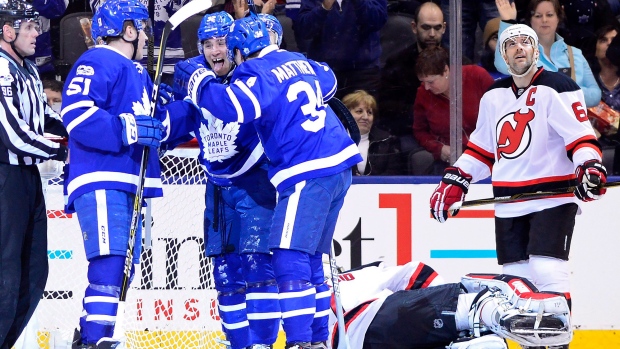 * Babcock is urging his players to seize the moment and not simply be content to be in the playoffs. "When you're a young guy you always think, 'Next year, next year.' Next year never comes in sport," the coach said. "You make good on the opportunities you get. You put everything into it and then if it doesn't go your way you regroup. But put everything into it here. We have an opportunity just like they do. We're going to put our skates on just like they do. We're going to Washington and we plan on winning."

* Babcock believes the start of the series is crucial if his team is to have any hope of upsetting the Presidents' Trophy winners. "That's the whole key. If you let them get going then they're going and they're loose and driving. But that pucker factor is an unbelievable thing and until you've been the best seed and until you've had your whole city expecting (you to win), you don't know what that's like and how good a defence that is for the underdog. It's unbelievable. So, my first year in Detroit I had never experienced anything like it. I couldn't believe how we couldn't skate or pass so pressure is a wonderful thing (pause) when you're the underdog."

In Babcock's first season in Detroit (2005-06), the Red Wings finished first in the NHL with 124 points before getting upset in the first round by the Edmonton Oilers.

* After missing Sunday's game, Frederik Andersen was a full participant at practice on Tuesday. Is he confident about starting Game 1? "Yeah, I mean, if everything goes well. You never can guarantee anything, but definitely want to work as hard as I can and do all the right things to be ready." Andersen said he went through "the protocol" after getting hit in the head by Tom Sestito on Saturday night.

Did he experience any concussion-related symptoms? "I'm not going to talk about that in playoffs," Andersen said. "It didn't feel too good. I'm sure you saw the (highlight). I had a process to go through and it is what it is, but hopefully feeling ready to go and feeling better and better as the day goes on." Andersen was asked if the league needs to do a better job of protecting goalies. "I don't know what can be done," he said. "I mean, [I] got to maybe do a better job being in the crease and maybe guys have to take ownership of where they jump at the last second." The Capitals were tied for second in the NHL this season with seven goalie interference penalties.

Andersen enters his first post-season in Toronto feeling good about what he accomplished during his career-high 66 starts this year. "Personally, I've been through some ups and downs and handled it pretty well. I think, that's another thing that I kind of learned a little bit as we went on. A good year of growing for me."

Does he feel like he needs to outplay Braden Holtby for the Leafs to have a chance? "No matter who you're playing, you got to prepare to play your best and that's the only focus I have. I'm confident we'll get enough chances to score on him too, but it's going to be a low-scoring game probably. But, yeah, just got to make the best of it when you get a shot."

* William Nylander and Connor Brown flipped spots at practice with the 20-year-old Swede joining Nazem Kadri while the 23-year-old Erie Otter product slotted alongside Auston Matthews. Babcock rotated the two right wingers much of the season although Nylander and Matthews seemed to really click down the stretch. So, why the move? "I don't know if I'm going with that line I just wanted you to ask me that question," the coach said to laughs. "I just think it's going to be tighter. We might need to be different. So, today we practised like that. We'll see tomorrow."