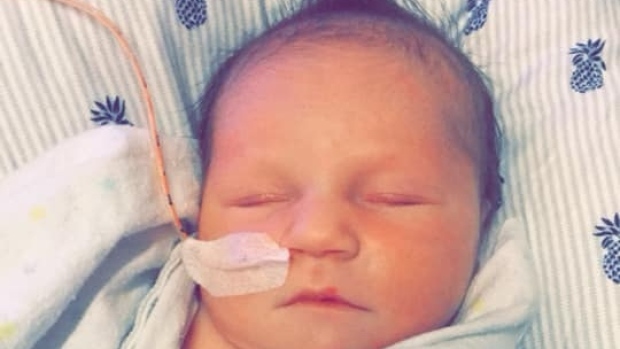 A photo of Sydney Jenkins shared by her father Scott , Scott Jenkins/Facebook

SASKATOON — The baby daughter of a promising Saskatchewan curler who died during childbirth last week is home.

Doctors determined amniotic fluid had entered her blood stream, which set off an embolism. Her heart eventually gave out.

Her husband, Scott Jenkins, has been providing online updates about baby Sydney Alyssa's progress, since his wife passed away.

The girl had been in the neonatal intensive care unit in critical condition and was provided with breathing assistance due to complications.

"Today I left the hospital with my little miracle and our guardian angel. I can’t thank everyone enough for all the support," Jenkins wrote on Facebook on Monday.

"I want to thank every single doctor and nurse who tried to save Aly's life and the ones who gave Sydney life.

"I know Aly is working her magic from above to help little Sydney Alyssa Jenkins and all our family and friends!"

There has been a huge outpouring of support for the family from across Canada, including a GoFundMe campaign, which had raised over $150,000 as of Tuesday afternoon. The baby has a four-year-old brother and an 18-month-old sister.

"Aly was a loving mom, wife, daughter, sister, co-worker and friend that touched the hearts of everyone she met. Please consider helping out Aly's loved ones as they navigate this tragedy and attempt to move forward in life," said the fundraising page.

A $10,000 donation in the curler's name has been made by the Sandra Schmirler Foundation to fund equipment at the Jim Pattison Children’s Hospital in Saskatoon. It's been matched by the hospital's foundation.

"Just as Sandra touched the hearts of so many, Aly was beloved by all who knew her and will be sorely missed," said the foundation.

Schmirler, who was from Biggar, Sask., skipped her team to a gold medal at the 1998 Winter Olympics — the first time women's curling was a medal sport. She died of cancer in 2000.

The Sandra Schmirler Foundation raises money to purchase life-saving equipment for hospitals for babies who are born premature and critically ill.