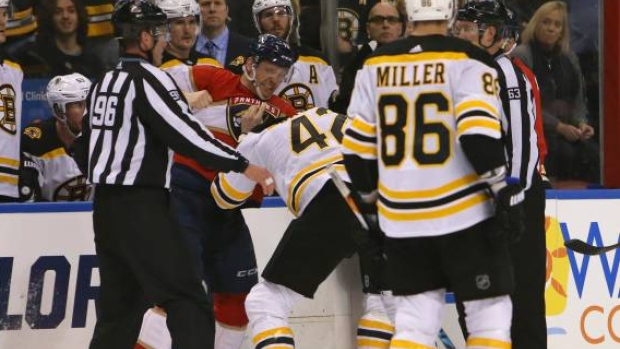 Boston Bruins veteran David Backes will be hearing from the league's Department of Player Safety once again on Friday after receiving a match penalty for his hit to the head of Florida Panthers forward Vincent Trocheck Thursday night.

With the Bruins down 2-0 in the first period, Trocheck circled with the puck from in front of the Bruins bench towards centre. Backes, skating back towards his bench, hit Trocheck with his shoulder appearing to make contact with Trocheck's head.

"Tracking back through the middle, expecting the puck to be dumped in, to go help (and) maybe be the first man back on it and all of a sudden he cuts to the middle and I'm going to the get the puck and he kinda just turns right into me," Backes explained of the hit after the game. "I feel like my shoulder's down, I hit him right through the shoulder and he's much smaller than I am. But I think the good thing is he finishes the game, he's back out there next shift and not injured on the play.

"I guess they saw enough to give me a match penalty for it and we'll see what happens from here."

Just after the hit, Panthers defenceman Michael Matheson fought Backes, picking up an instigator penalty and a 10-minute misconduct. The Panthers failed to score on the ensuing power play, though Trocheck scored the game's final goal in the second period, making the final 3-0.

Under rule 21.1, Backes is suspended indefinitely pending a review of the hit. He could receive his second suspension of the month, or have the match penalty rescinded.

UPDATE: Joe Haggerty of NBC Boston reports Backes is not expected to face any further discipline for the hit.

The 33-year-old picked up a three-game suspension on March 7 for interference on Detroit Red Wings forward Frans Nielsen. Prior that Backes had never been suspended and said Thursday he didn't know if his latest hit would lead to him missing more games.

"I won't bother to guess," Backes said. "I've had obviously two periods to think about it and it's the kind of hit that I've been doing for years so if this is kind of the NHL, the new standard then I hope I can have my old league back.

"But, if not, then maybe there's some adjustments that I need to make. I'll tell you if I try to get in a toe-drag competition with guys like Trocheck, I'm going to lose. So the physical part of the game I think still needs to be there and... I don't know, hopefully nothing further and we continue to play on Saturday."

The Bruins visit the Tampa Bay Lightning on Saturday in a key Atlantic Division matchup.