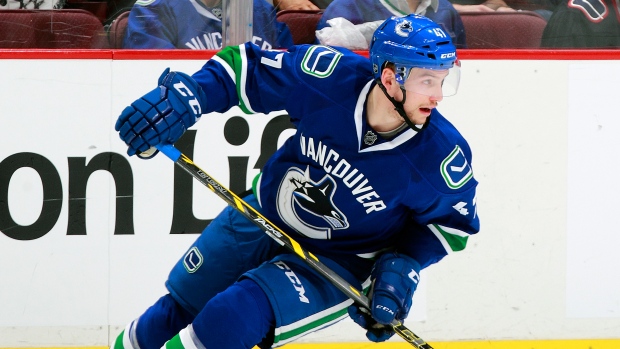 Vancouver Canucks forward Sven Baertschi has been out since Oct. 24 due to a concussion and it doesn’t appear his return to the lineup is imminent.

Baertschi told Swiss news outlet Blick that he returned to skating last weekend, but had to leave the ice shortly after the session began.

“Last Saturday I returned to the ice in training for the first time since October 24th,” Baertschi said, per Google Translate. “But I had to stop this exercise after 15 minutes, because I was so dizzy. As soon as I move and spin properly, I see everything around me completely blurry and have a headache.”

Baertschi sustained his concussion on a hit from Vegas Golden Knights forward Tomas Hyka. He missed nine games in February 2017 due a concussion and told the Blick that he's suffered a total of four or five concussions in his playing career.

The 26-year-old was limited to 53 games last season due to a broken jaw and a separated shoulder, but was off to a productive start this year before the hit from Hyka. He has three goals and six points in 10 games this season.

Baertschi, who is in the first season of a three-year, $10.1 million contract, said he plans to be patient in his recovery.

"A concussion can be cured after one and a half weeks, but it can take months," Baertschi said. "In this situation, I have no choice but to wait and think positive in spite of everything. "

"If I returned to the game too soon after the injury, it could be more serious. And that's a too high price for me, after all, I also want to be able to enjoy my life after my hockey career with my family. "