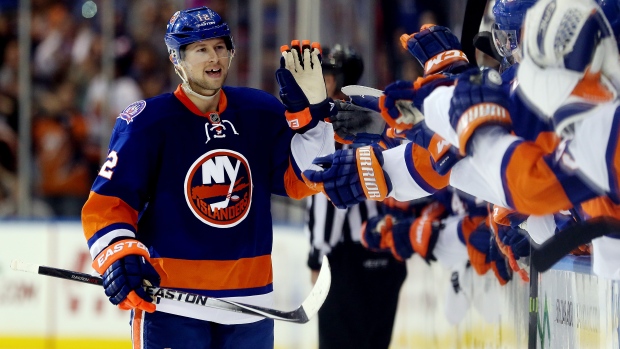 UNIONDALE, N.Y. - One thing is clear through two months of the NHL season. If you're going to beat the New York Islanders, you'd better get them in regulation.

For the ninth time in nine tries, the Islanders come out on top in extra time. A tying goal by Matt Martin got them into overtime, and Josh Bailey finished off the New Jersey Devils in the fifth round of a shootout, lifting New York to a 3-2 victory on Monday night.

"We have a lot of confidence, whether it's in OT or shootout," said Bailey, who also cut New Jersey's lead in half in the second period. "We have a lot of guys who can put the puck in the net."

The Islanders have won two straight in which they have trailed going into the third period. They rallied to beat Western Conference-power Chicago on Saturday. New York, with an Eastern Conference-best 21 wins, trails Pittsburgh by two points.

"We don't change our mindset no matter who we're playing," Bailey said. "With this corps, we're trying to worry about what we have to do in here."

Bailey spoiled the night for Devils goalie Keith Kinkaid, a Long Island native who had dozens of family and friends in attendance. His father is a former Islanders season-ticket holder, and the younger Kinkaid dreamed of playing at Nassau Coliseum.

That wish came true in his second NHL start and sixth overall appearance. However, he skated off still in search of his first win.

"It was a memorable game in a memorable place, that's for sure," Kinkaid said. "I thought I played well. It just wasn't enough.

"I was a little nervous. It's a big game against the Islanders, a top team in the league."

Martin made it 2-2 with 4:15 left in regulation. Bailey's goal between Kinkaid's pads put the Islanders in front in the shootout, which ended when Jacob Josefson missed the net on New Jersey's final attempt.

Kyle Okposo added a shootout goal, and Jaroslav Halak made 26 saves for the Islanders — 6-0 in shootouts.

Marek Zidlicky and Scott Gomez scored first-period goals, and Jaromir Jagr assisted on both but New Jersey dropped its fourth straight (0-2-2). Kincaid finished with 31 saves. Gomez had the lone shootout goal for the Devils, 1-5 in the tiebreaker.

Martin scored with 9:15 remaining in regulation, beating Kinkaid with a wide-angle shot for his fourth goal.

"We got ourselves regrouped and played a hard 40 minutes," Martin said. "We're finding ways to win games. This one feels really good."

The Islanders killed off the majority of John Tavares' retaliatory slashing penalty to get the game into overtime. Tavares speared the defenceman after absorbing an open-ice hit seconds earlier.

The trio of Jagr, Gomez, and Zidlicky made its presence felt in the first and staked Kinkaid to a 2-0 lead — first on a power play and then at even strength.

Zidlicky struck with 7:45 left when Gomez sent a pass from the right side of the zone into the middle, where Zidlicky — steps in front of the blue line — ripped a drive that beat Halak.

Gomez and the Devils used help from the Islanders to double their lead. Gomez was at the right-wing boards when he spotted Jagr dashing down the left side for a backdoor play. Gomez zipped the puck across, but before it got to Jagr, it ticked off New York defenceman Lubomir Visnovsky and caromed past Halak with 4:40 remaining.

Gomez has two goals and four assists in eight games since rejoining the Devils on Dec. 1.

Zidlicky and Jagr got the assists on his latest goal, further padding Jagr's career dominance of the Islanders. Having faced them 105 times — often as a divisional rival — Jagr has 61 goals and 91 assists. The 152 points are his most against any team.

Bailey cut the Islanders' deficit to 2-1 at 1:51 of the second, 7 seconds after Jagr's late first-period hooking penalty expired. Bailey was left wide open in the slot for a shot off a feed from Ryan Strome for his fifth goal.

Bailey, who missed three of the five previous games, has scored in two of his past three outings.

"After the first period, we weren't panicked or anything," Bailey said. "We needed to find our game, and I thought we did that."