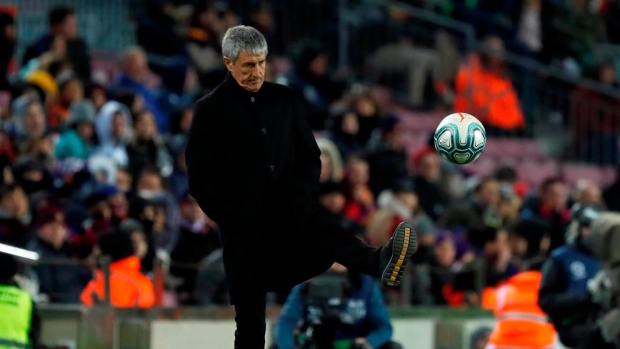 BARCELONA, Spain — Still new and finding his way, Barcelona coach Quique Setién has already had to rely on some timely goals to avoid embarrassing losses.

Lionel Messi scored in the 76th minute to give Barcelona a 1-0 win over Granada in the Spanish league in Setién’s debut on Sunday. With Messi resting three days later, the team needed a pair of late goals from Antoine Griezmann to better third-tier club Ibiza 2-1 in the Copa del Rey.

Given the difficulties against more accessible rivals, Barcelona now faces what appears to be a truly tough test at Valencia in the league on Saturday.

Setién was hired last week to replace Ernesto Valverde in the Catalan club’s first mid-season coaching change since 2003. Barcelona had won back-to-back league titles and was still atop the standings under Valverde when he was let go, but the club was looking to rediscover the high-possession attacking style that Setién has always admired and applied to his teams.

The first results, however, are mixed.

The team has increased its passes and the time it holds the ball. Its possession of 82% against Granada came close to reaching the all-time league record of 84% established by Barcelona in 2011.

But that has yet to produce more scoring chances and goals.

Against Ibiza, Setién rested Messi, defender Gerard Pique and holding midfielder Sergio Busquets — a player Setién has said is fundamental to Barcelona. The coach also experimented with a three-man defence with Clement Lenglet as a sole central defender flanked by Sergi Roberto and Junior Firpo, both better attackers than defenders.

The result was a Barcelona team that was fragile in defence and required more than an hour to get a shot in the goal. Barcelona even needed a bit of good fortune to get past Ibiza in a match played on artificial turf on the Balearic Island. The home side had a goal waived off for a foul and had a shot hit the post while leading 1-0.

“We were imprecise with the ball. It was difficult for us. We weren’t comfortable,” Setién said. “It is something that we have to improve and we have spoken about it. We did not have control of the game. We let them get out too easily on counterattacks and have opportunities to attack us. We weren’t patient and lacked the precision we need.”

Griezmann is the one member of Barcelona that got a boost from the match.

The France forward is in his first season at Barcelona after transferring from rival Atlético Madrid for 120 million euros (then $134 million) in July. But with Messi out and Luis Suárez injured, Griezmann came through to save Barcelona from a painful early exit. His season tally of 11 goals in 27 appearances also shows his significant contributions to his new club as a support player to Messi.

For Griezmann, it is a question of the team adapting to Setién’s plan on the fly.

“It is a new system and we have to get used to it and keep working,” Griezmann said. “Every match has its difficulties. We have to have confidence in ourselves when we have the ball, create chances, move in attack, and little by little pick up the new tactics of our coach.”