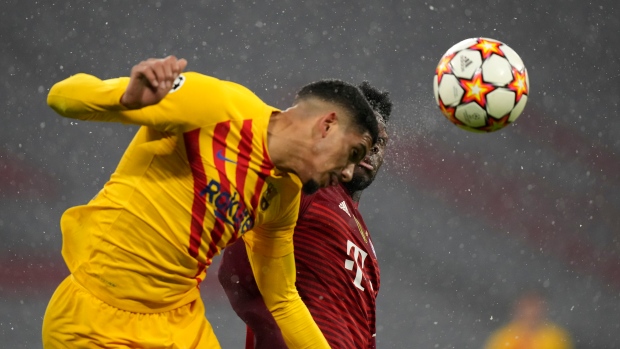 MUNICH (AP) — Barcelona will not play in the knockout rounds of the Champions League for the first time in 18 years after a 3-0 loss to Bayern Munich on Wednesday ensured the Catalan club was eliminated from European soccer's premier competition.

Barcelona drops into the Europa League playoffs after finishing third in Group E, thanks to Benfica's 2-0 win over Dynamo Kyiv in the other game of the evening.

That ended a Barcelona campaign which would have been unthinkable in the club's heyday with Lionel Messi up front and Pep Guardiola as coach from 2008 through 2012. The group stage began with a 3-0 loss to Bayern at the Camp Nou and got worse with a 3-0 defeat and 0-0 draw against Benfica. Barcelona scored only two goals in six games, both against last-place Dynamo, and conceded nine.

“We start a new era, from zero, from here, to work hard and to recover Barca and to put Barca in the place that we deserve, that is in the top of the Champions League,” coach Xavi Hernández told broadcaster DAZN. “This is our reality. We are out of Champions League, we are in Europa League, but this is not the place of Barcelona.”

Defeat in the snow in Munich will deepen Barcelona's already overwhelming financial problems as it misses out on lucrative prize money and exposure for sponsors. Sitting seventh in La Liga means Barcelona may not even qualify for next year's competition.

“We need to work hard, many things that put Barcelona in this situation. But this is our reality. I cannot say anything else,” Xavi said. “We need to win Europa League, work hard for recovering points in La Liga, win the cup, win the Super Cup, this is what Barcelona deserve ... We will try to work hard. We have many injuries. Maybe we can sign some players now in January. Let’s see."

Unlike the hammer blow of Barcelona's 8-2 loss to Bayern in August 2020, this time the German champions calmly took their time dismantling a Barcelona team which only registered two shots on target.

The first goal Barcelona conceded Wednesday was one of fine margins, with goal-line technology required to show Thomas Müller's looping header had crossed the line before Ronald Araujo belatedly attempted to clear.

The second was a simple goalkeeping error as Marc-André ter Stegen let Leroy Sané's speculative long-range shot bounce off his arm and in. That left Xavi's team 2-0 down at halftime and needing either its own stunning comeback or a similar feat from last-place Dynamo against Benfica.

The deficit worsened in the 62nd minute when Alphonso Davies, the Canadian left-back whose pace had caused problems all game, cut the ball back from the touchline for Jamal Musiala, who applied a simple finish from within a crowd of Barcelona players.

Playing at home in an empty stadium because of new pandemic-related restrictions, Bayern was already assured of qualifying as the group winner and finished with six wins from six games, matching Liverpool and Ajax on a perfect record this season. Coach Julian Nagelsmann told DAZN his team could have scored “more than three” goals against Barcelona.

Bayern is the only German team in the round of 16 after Borussia Dortmund, Leipzig and Wolfsburg all fell short in the group stage. The last time that happened was 2017-18.

Besides the shock of not qualifying, Barcelona may have to deal with an injury for Jordi Alba after the full-back limped off with an apparent thigh problem.