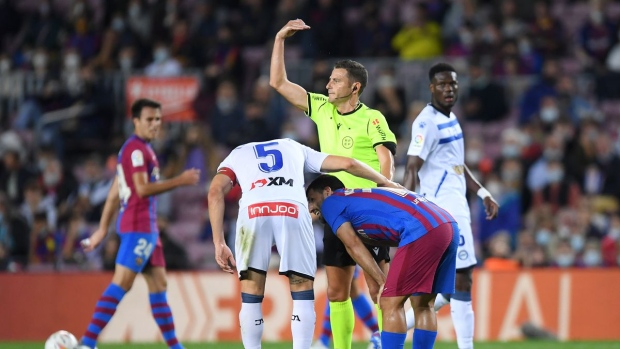 Barcelona will be without the services of Sergio Aguero for the next three months.

The team made the announcement on Monday, a day after the Argentina striker was taken to a hospital after experiencing chest pains during the team's 1-1 draw with Alaves.

LATEST NEWS | Barça player Kun Agüero has been subjected to a diagnostic and therapeutic process by Dr. Josep Brugada. He is unavailable for selection and, during the next three months, the effectiveness of treatment will be evaluated in order to determine his recovery process. pic.twitter.com/My9xWpm6I4

Barcelona say the 33-year-old Aguero has been "subjected to a diagnostic and therapeutic process by Dr. Josep Brugada" and the effectiveness of the treatment will be determined over the course of the next three months "in order to determine his recovery process."

Aguero began holding his chest during the final minutes of Sunday's first half and he was substituted out at halftime.

"I was told he was feeling a bit dizzy," Barca caretaker manager Sergi Barjuan said after the match. "I have just learned that he was taken to hospital and I can't say much more until I know."

Sunday was Aguero's first start at Camp Nou since signing as a free agent in the summer after a decade at Manchester City and only his fifth appearance on the season. Aguero made his season debut on Oct. 17 having had been sidelined with a calf injury.

A native of Buenos Aires, Aguero has been capped 101 times by Argentina and was a member of the Copa America-winning squad from this past summer.