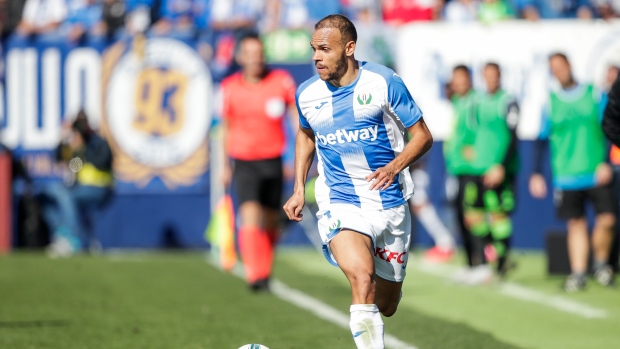 “I was surprised at first,” Braithwaite said after being officially introduced by the club. “To play for Barcelona is one of the greatest things that can happen in a player's career. For years I've wanted to reach this level.”

Almost three weeks after the January transfer window closed, the Spanish league gave Barcelona permission to make an emergency signing after it was left without Luis Suárez and Ousmane Dembele for long periods due to injuries to both attacking players.

However, it left Leganés, a small club from Madrid, without its most talented attacking player as it struggles to rise out of the relegation zone. It already lost striker Youssef En-Nesyri to Sevilla last month.

Leganés said it also asked for permission to sign a player to replace Braithwaite, but had the request denied.

“We find ourselves in a situation of enormous and harmful disadvantage," club director general Martín Ortega said. "We cannot understand the current regulation in which a club, having a player injured for a long period of time, can carry out a unilateral operation and pass the problem off on another club.

“We understand that this rule could be applied in the case where both clubs are in agreement, but this rule as it stands goes against the equality of clubs."

While most European countries forbid any signing between transfer windows, the Spanish league can grant clubs exemptions in certain cases.

Braithwaite, who has also played for Bordeaux and Toulouse, will not be eligible in the Champions League this season, just La Liga.

It is a rapid rise in club football for the 28-year-old Braithwaite, who featured for Denmark at the 2018 World Cup.

He was playing in English second tier with Middlesbrough during the first half of last season, scoring only three goals in 19 games in all competitions.

He arrived midway through the 2018-19 season at Leganés and helped the club avoid relegation. He has eight goals in 27 appearances for Leganés this season.