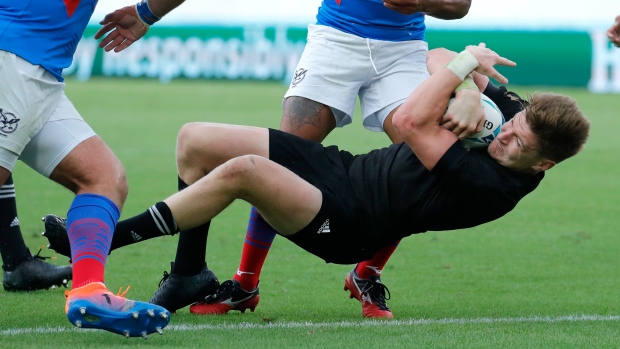 TOKYO (AP) — Given the keys to the All Blacks machine, first-time flyhalf Jordie Barrett stalled it a couple of times.

Barrett stayed positive, though, refocused, respected the ball, and ultimately drove the world’s No. 1-ranked rugby team smoothly and superbly.

Much like Barrett, New Zealand sputtered for a while then started purring, and put Namibia’s amateurs in their place in the Rugby World Cup by a 71-9 scoreline on Sunday.

New Zealand’s third win from three matches in Pool B set up its last pool game against Italy next weekend as a quarterfinal decider.

Just four days after blitzing Canada 63-0, the All Blacks raised the highest score at this World Cup with a victory by 11 tries to nil at Tokyo Stadium.

It was competitive for a while. The Namibians were closer to full strength eight days after conceding 57 to South Africa, and gave New Zealand some bother in the first half. Their plan to play “boring rugby” by keeping the ball effectively frustrated the All Blacks, and their gang-tackling forced errors from the impatient defending champions. Scrumhalf Damian Stevens kicked all three of his penalty attempts to have them trailing only 10-9 after 30 minutes.

Nobody believed an upset was on the cards from the lowest ranked team in the tournament, but the entertained crowd of 48,354 was buzzing.

The All Blacks finally got their act together with 14 men, worked the phases, and stretched the Namibians to score tries through Angus Ta’avao, Laulala’s replacement, and fullback Ben Smith in injury time.

They led 24-9 at halftime, and waiting in the changing room for them was unhappy coach Steve Hansen. He blamed himself. The four-day turnaround meant they had only two soft training runs and weren’t mentally ready for an opponent who were. He advised them to get their heads in the right space, carry hard and clean out the rucks, and hold on to the ball.

“It’s not a major issue,” Hansen said. “It’s a good reminder to all of us that every time you play, you have to get yourself in the right head space to go and perform at the level you want.”

Namibia couldn’t handle the ferocity of the All Blacks after halftime. They were already outmuscled in the scrums, where New Zealand had an extra 10 kilograms per man, and they were beaten up in contact. Namibians were walking off injured as New Zealand was making luxury substitutions and playing people out of position, and staying in the flow.

Given a dominant platform up front, the All Blacks backs shone. Centers Anton Lienert-Brown, the man of the match, and Jack Goodhue, kept busting the Namibia lines and knocking back their runners.

Lock Brodie Retallick, playing his first test in 10 weeks after a dislocated left shoulder, played only a scheduled 30 minutes but was effective carrying the ball, and had a chargedown. He showed his desire at halftime by doing shuttle runs behind the posts. He will get 60 minutes against Italy, Hansen said.

A second All Black prop, Ofa Tuungafasi, was sin-binned for a similar arm tackle on the head of an opponent who was bent low. Hansen said both yellows were fair calls, but sympathized with his players.

The seven tries in the second half came at a regular clip, and the best was probably the last in the 78th, when an outrageous behind-the-back pass by Brad Weber freed TJ Perenara, who was smashed in the left corner but managed to plant the ball beside the flag.

“It was a special one,” Hansen said. “It even got me out of my seat, not too many things do that.”

He was full of praise for Barrett, who was at flyhalf to give specialists Richie Mo’unga and brother Beauden Barrett a rest. He had a conversion charged down in the first half for the first time, but hit eight goalkicks in a row, some from sharp angles, and scored a try for a personal haul of 21, two points more than Beauden has scored in a World Cup match.

“Jordie drove the team around the park, and once we started to deliver go-forward ball he was very, very good,” Hansen said. “He’s not a first five-eighth, and I don’t know how many tests he’ll play there because after this tournament I’m not going to be in charge. But to play as he did, he should be really, really excited. And fulfilled, and proud.”

Barrett was uncertain, too.

“I’m not sure I’ll do that again but it’s going to grow my game, grow my understanding, and I’m sure it’s going to help,” he said. “I loved it, every minute, even that first 30 when we were up against it. I felt like I grew into the game.”