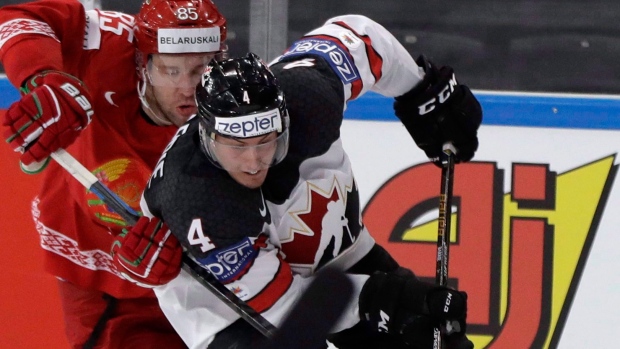 TSN Hockey Insider Darren Dreger reports Barrie, who was ruled out of the remainder of the tournament with a lower-body injury on Wednesday, sustained a leg laceration while wrestling with a teammate inside the team's hotel.

Barrie was wrestling with a teammate in his hotel room and suffered a leg laceration. For precautionary reasons he is done.

Barrie paired with Calvin de Haan in the team's Wednesday practice before the incident. He was tied for the team lead with seven points through three games.

Dreger reports he was ruled out of precautionary reasons.

The 36-year-old has never appeared in an NHL game and has spent the past four seasons with the Magnitogorsk Metallurg. Lee scored 14 goals and added 51 assists in 60 games last season and added 21 points in 18 playoff games.

Barrie played in 74 games with the Colorado Avalanche during the regular season, scoring seven goals and adding 31 assists. He will turn 26 in July.