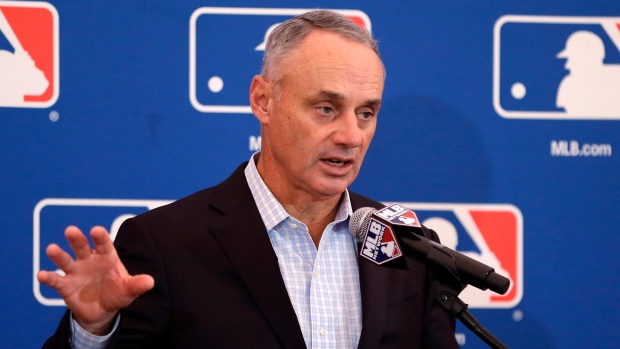 What a difference a week makes. Major League Baseball went from extremely low positive COVID-19 test results across the sport to a full-blown outbreak with the Miami Marlins.

The latest count has 18 Miami players and two coaches having tested positive. The Marlins are still stranded in Philadelphia where they opened the season last weekend. The team’s entire travelling party is under isolation at the team hotel as they undergo further testing and treatment. Marlins games have been postponed through the weekend.

The same is true for the Philadelphia Phillies as their players, coaches and clubhouse staff are all being tested for COVID-19 to make sure they weren’t infected by the Marlins. So far, one visiting clubhouse worker, one home clubhouse worker and one coach have tested positive.

The league is being extra cautious with the Phillies, postponing their weekend series against the Blue Jays. The goal is to avoid another massive outbreak, which would put more players at risk and further complicate scheduling.

On Friday morning reports surfaced that the St Louis Cardinals and Milwaukee Brewers game scheduled for tonight is also cancelled due to positive tests on the Cardinals. It’s unclear at this point how many members of the Cardinals traveling party in Milwaukee are affected.

The quick response by the league to postpone the game shows a much more aggressive approach to containing the virus. It’s a significant change from last Sunday, when the Marlins and Phillies played even after four Marlins players had already knowingly contracted the virus.

There is no manual for trying to play a season during a pandemic, so everyone is learning as we go and adjusting where appropriate.

It is unclear how many games will be affected by the Cardinals situation, but it will be extremely difficult to reschedule all of the postponed games with such a short window until the end of the season.

It is likely that the standings in the AL and NL East will be determined by winning percentage and not actual wins and losses. That might now also be the case in the Central Division of both leagues.

Making up lost games is far less important than the health and well-being of the team personnel. The focus now is on containing the spread of COVID-19 throughout the league.

Owners had no thought of cancelling the season when news of the Marlins’ outbreak became clear early in the week. By all accounts, they still feel that way. The league, as well as the MLB Players Association, contemplated the possibility, if not the probability, of an outbreak like this.

The health and safety protocols do not indicate any specific circumstances under which the season would be cancelled. The ultimate decision is in the hands of the commissioner Rob Manfred.

What team executives are saying

Prior to the news about the Cardinals, I spoke with executives in the West, Central and East divisions from both leagues, and they all expressed concerns about the Marlins’ and Phillies’ health as a priority.

But executives in the West and Central said that for them it was “business as usual.”  They were focusing on keeping their own players healthy and trying to win as many games as possible. They understand there will likely be a variance in the number of games played in the East divisions, but that is out of their control. That will obviously now change for teams in the Central divisions, as their schedules are likely to be impacted.

All of the executives I spoke with wondered if the recent outbreaks would cause some players to reconsider playing out the season.

For instance, Mike Trout is on paternity leave as his wife is set to deliver their first child. Could he opt to just stay home for the rest of the season? There are players, like Astros outfielder George Springer and Cincinnati Reds starter Trevor Bauer, who have already accumulated the few days of service time this season they needed to qualify as free agents at the end of the season. They don’t need to play to get their big paydays this off-season.

One East Division executive wondered whether more teams would take positions like the Washington Nationals did this week when they voted to not go to Miami to play this weekend because of the Marlins positive tests.

The Yankees and Orioles did take advantage of the gaps in their schedule created by the postponements to play a two-game series against each other, which could create scheduling flexibility later in the season. It’s unclear how games will be made up as the schedule is rigidly bound to the calendar, with the regular season expected to end on Sept. 27.

It remains to be seen how the Cardinals situation will be handled and how it will impact games in the short-term. But we know the Cardinals and Brewers will have games to make up at some point.

In order to facilitate making up lost games in the way of doubleheaders, Baseball is getting creative. There are reports that double-headers will be played as two seven-inning games to protect the arms of pitchers and reduce the risk of injuries. It is something that is done in the minor leagues and now we will see it in the majors.

Injuries were a major concern for all three executives I spoke with. We have already seen a significant number of pitchers suffer significant injuries. The execs believe the starting and stopping of training has led to severe reactions in some player’s bodies.

Baseball players react well to consistency and continuity. Long periods of time without intense workouts followed by a quick summer camp may have been too much for some players. The executives were particularly concerned about how the postponed games and gaps in the schedule will impact players who just got heated up and now have to sit and wait for live game action again.

Learning on the fly

There is no precedent for any of this. We are all learning on the fly how to handle circumstances as they present themselves. Adjustments are being made as we learn more about the challenges of keeping players healthy.

Players now have to wear surgical masks when travelling, as opposed to cloth masks, and each team needs an accountability officer to police players at the home stadium and on the road. It is highly recommended that players stay in the hotel when travelling and only leave when going to the ballpark.

The layers of the protocols have been effective for 29 teams. It is imperative that MLB gets to the bottom of what happened with the Marlins and Cardinals. They need an idea about which players initially contracted the virus and how it spread through the clubhouse.

As a general manager, I would want to take the pressure off of my manager. I would take on the role of the nagging principal trying to get players to follow the rules. I understand that spitting and licking fingers to grip the baseball can be instinctive, but those are habits that need to be broken in order to keep everyone healthy.

There is no excuse for celebrations that include physical contact. I have seen high-fives, fist bumps and hugs in the on-deck circle, dugout and at home plate. Players typically have time to think about what is appropriate while waiting for a teammate to get to the dugout after a good play or a big hit. There needs to be someone (probably a trainer) in the dugout shouting at the players to remind them to not engage one another. It is critical that this gets cleaned up around the game. The blatant disregard of the protocols in the dugout and on the field is inexcusable.

In just a week we’ve gone from feeling safe and confident the season could be completed to fear that we might not get through another couple of weeks. Containment is the name of the game right now. Commissioner Manfred and MLBPA president Tony Clark will earn the biggest save ever if we get to the end of the season without a shutdown.