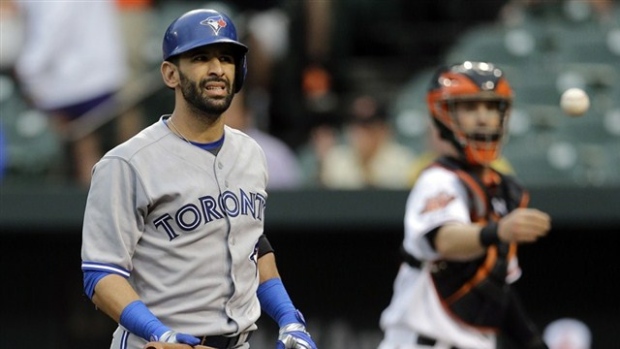 TORONTO -- Toronto Blue Jays slugger Jose Bautista will likely miss a few days with a mild hamstring strain but is not expected to go on the disabled list.

The all-star right-fielder left Sunday's game in Cincinnati because of tightness in his left hamstring. He had an MRI exam done Monday and Blue Jays manager John Gibbons confirmed it was just a mild strain.

"I think we lucked out there," he said before Monday night's home game against the New York Yankees.

Bautista has a .305 batting average, 15 home runs and 49 RBIs in 77 games this season. His defensive play has been excellent and he leads all major-league players in fan voting for the July 15 all-star game in Minnesota.

Gibbons was unable to pinpoint a specific return date but was relieved it didn't appear to be a serious injury.

The Blue Jays are coming off a poor 3-7 road trip and were set to host the Yankees for a key three-game series. New York and Baltimore entered play just 1 1/2 games behind first-place Toronto in the American League East division standings.

Toronto recalled outfielders Anthony Gose and Kevin Pillar from triple-A Buffalo on Monday and placed infielder Brett Lawrie of Langley, B.C., on the 15-day disabled list with a finger injury. The team also optioned catcher Erik Kratz to the Bisons.

"We need the two extra outfielders to cover while Jose is out," Gibbons said. "When he comes back, I don't necessarily think we need two. But for the time being, we do."

"It's an opportunity for somebody," Gibbons added. "That's what it comes down to."

He also confirmed that Lawrie will likely be out for three to six weeks. The Canadian infielder sustained a broken right index finger when he was hit by a pitch on Sunday.

Toronto's lineup card for the opener of the three-game series against the Yankees had a different look. Designated hitter Adam Lind moved into Bautista's No. 3 slot, batting behind shortstop Jose Reyes and left-fielder Melky Cabrera.

First baseman Edwin Encarnacion remained in the cleanup spot and centre-fielder Colby Rasmus batted fifth and catcher Dioner Navarro was in the No. 6 spot.