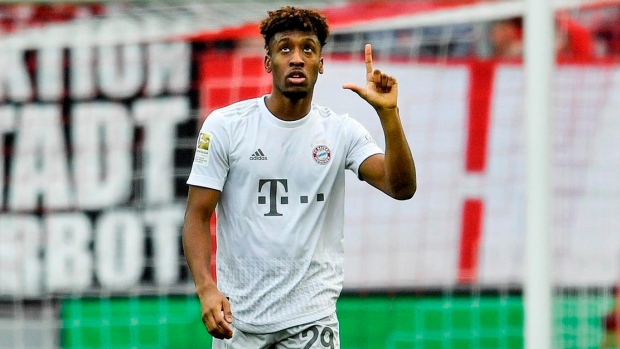 Chasing its eighth successive title, Bayern moved one point ahead of Leipzig at the top of the table. Bayern stormed into an early lead, leaving captain and goalkeeper Manuel Neuer pleased with the “ice-cold” finishing, but relaxed in the second half and allowed Cologne a string of good scoring chances.

“I expected a bit more resistance from Cologne early on," Neuer said in televised remarks. “I'm annoyed that we didn't keep playing with consistency, because we ended up making life quite hard for ourselves.”

With Cologne wearing special shirts for the city's upcoming carnival, Bayern spoiled the party atmosphere with two goals in the first five minutes.

Thomas Müller set up both goals as Cologne's defence failed to track the Bayern players' movement. Müller first cued up Robert Lewandowski for his 23rd goal in 22 Bundesliga games in the second minute.

He then set up Kingsley Coman to make it 2-0 as Bayern comfortably exchanged passes in the Cologne penalty area.

Bayern extended its lead again in the 12th minute when Gnabry picked up a corner from Joshua Kimmich and backtracked to the edge of the penalty area before hitting a powerful low shot.

It could easily have been more as Bayern outshot Cologne 18-1 in the first half. Gnabry hit the bar from a tight angle after rounding the keeper in the 29th.

Cologne tried to claw its way back into the game in the second half, but VAR intervened. Jhon Cordoba put the ball into the net in the 46th but it was ruled out on video review for a narrow offside. Neuer stormed up the field to cut out a Cologne breakaway in the 61st.

Gnabry scored Bayern's fourth with a moment of individual skill, dribbling in from the left and dodging challenges before curling a shot into the top corner. Mark Uth scored a consolation goal for Cologne on the counterattack in the 70th. Cologne had more chances to score late on as Bayern's defence seemed to relax, but Neuer kept them at bay.

Champions League football continues to slip away from Schalke, which stayed sixth after drawing 0-0 at Mainz. Schalke is now six points off fourth-place Borussia Mönchengladbach, which has an extra game to play.

Since the winter break, David Wagner's Schalke has shifted into a defensive style more reminiscent of his predecessor as coach, Domenico Tedesco. Sunday's game was the third straight Bundesliga draw for Schalke, which has scored just one goal in its last four league games.

Mainz is 15th, five points above the relegation playoff spot.