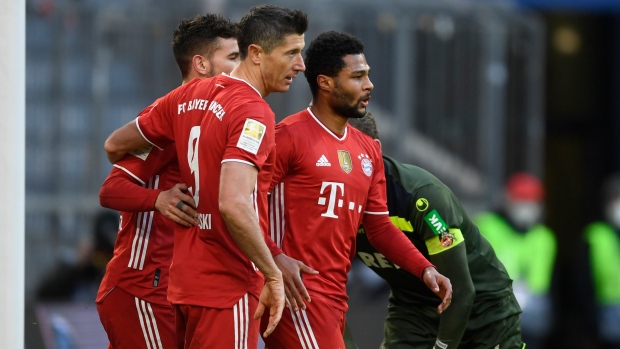 Lewandowski took his season tally to 28 as Bayern stayed two points clear of Leipzig, which beat Borussia Mönchengladbach 3-2 with an injury-time winner in the late game.

Bayern midfielder Leon Goretzka, making his first league start since recovering from the coronavirus, lifted a cross for Eric Maxim Choupo-Moting to open the scoring in the 18th minute, then brilliantly set up Lewandowski in the 34th.

Goretzka received the ball from Lewandowski, turned and played the ball through Cologne defender Rafael Czichos’ legs, and sent it to the right for Lewandowski to finish.

Defensive errors from David Alaba and Jérôme Boateng allowed Ellyes Skhiri to pull one back after the break as Cologne enjoyed an encouraging phase.

Bayern coach Hansi Glick sent on Thomas Müller and Serge Gnabry in the 64th. The former was making his comeback from the coronavirus and he needed less than a minute to set up Lewandowski's second goal.

Bayern goalkeeper Manuel Neuer almost gifted Cologne a way back when he lost the ball to Dominick Drexler, but the midfielder’s effort from a difficult angle went back off the post.

Gnabry sealed the result in the 82nd and wrapped up the scoring in the 86th.

Alexander Sörloth scored in injury time to keep Leipzig on Bayern’s heels. There were complaints from Gladbach that the Norwegian forward pushed Valentin Lazaro before reaching Christopher Nkunku’s cross, but the goal was awarded after a VAR check.

Dayot Upamecano, who is joining Bayern next season, had a game to remember for Leipzig. The French defender conceded a penalty for a clumsy challenge on Breel Embolo in the fifth minute, but helped set up Yussuf Poulsen for 2-2 in the 66th.

But the visitors offered little thereafter. Sörloth had a goal ruled out for handball before he set up Nkunku for Leipzig’s first in the 57th. Poulsen’s equalizer was deserved and Sörloth’s winner rewarded the home team’s perseverance.

It was Leipzig’s fifth win in succession, while Gladbach slumped to its third defeat in three games since it was announced coach Marco Rose will take over Dortmund next season.

Schalke sporting director Jochen Schneider had to deny reports of mutiny within the squad before the struggling team lost in Stuttgart 5-1. Kicker and other media outlets reported several players asked for Christian Gross, already Schalke’s fourth coach of the season, to be replaced.

The team’s performance seemed to confirm the reports.

Japan midfielder Wataru Endo was left completely free to score his first two goals in the league, before more lacklustre defending allowed Saša Kalajdžic to score in the 34th.

Sead Kolašinac answered for Schalke in the 40th, but substitute Nabil Bentaleb saw his weak penalty saved and Endo set up Philipp Klement for Stuttgart’s fourth in the 88th. Daniel Didavi completed the rout in injury time.

Dortmund cut the gap on fourth-placed Eintracht Frankfurt to three points. The top four qualify for the Champions League.

Bielefeld’s defeat was good news for Hertha, which lost despite a good performance in Wolfsburg. Only goal difference is keeping Hertha above Bielefeld in the relegation zone.