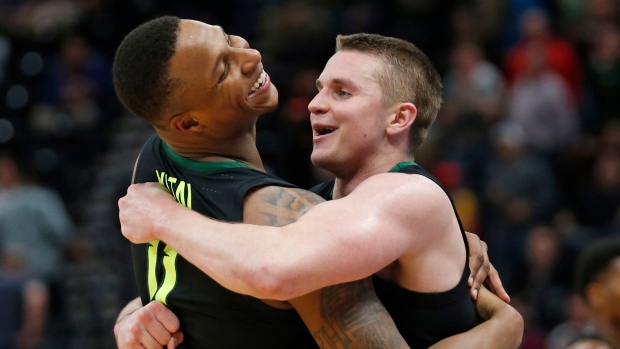 The ninth-seeded Bears (20-13) found gaps in Syracuse's 2-3 zone, mostly by getting the ball into the high post or driving and kicking out. Baylor nearly matched the school tournament record of 11 3-pointers in the first half (10) and made 16 of 34 overall.

Baylor shot 54 per cent and slowed Syracuse's 3-point barrage in the second half to earn a shot at top-seeded Gonzaga on Saturday.

No. 8 seed Syracuse (20-14) matched the Bears nearly 3 for 3 in a stellar first half before bogging down in the second.

Elijah Hughes had 25 points and hit seven of the Orange's 12 3-pointers. Tyus Battle scored 16 points after missing both of Syracuse's ACC Tournament games with a bruised back.

The Orange have the nation's tallest team -- topped by 7-foot-2 Pascal Chukwu -- and use it to their advantage in a 2-3 zone that's already difficult to prepare for come March. The defensive scheme helped Syracuse reach at least the third round of the NCAA Tournament in its eight previous trips, and it made the Final Four as a 10 seed in 2016.

But the zone does have its flaws, as Virginia showed while hitting a school-record 18 3-pointers in the Orange's regular-season home finale.

The Bears took a similar tack, hitting six 3s in the first six minutes a variety of ways: drive and kicks, after offensive rebounds, extra deep, even a banked-in one by Mark Vital.

Not wanting to be left out of the 3-or-nothing party, Syracuse dotted the shot chart along the arc, hitting nine 3-pointers of its own -- one for a four-point play by Battle.

Hughes had 18 points by halftime and looked at Baylor coach Scott Drew after dropping in his fifth 3-pointer of the half.

The trey spigot remained open in the second half -- at least for Baylor.

The Bears opened 6 for 13 from the arc and Syracuse had a stretch of nearly five minutes without a field goal as the Bears stretched their lead to 68-59.

Syracuse tried to match Baylor shot for shot, but came up short in its first opening-round NCAA Tournament loss since 2006.

The Bears caught fire at just the right time, ending a four-game losing streak to advance in the bracket.