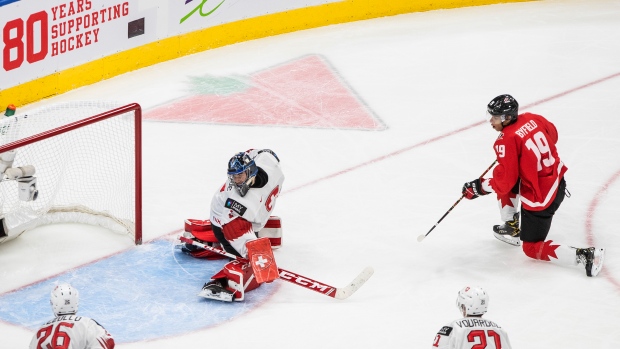 For the second year in a row, forward Quinton Byfield is the youngest player on Team Canada at the World Junior Championship.

Last year, he was a 17-year-old draft-eligible player who played a depth role on the squad that won gold in the Czech Republic.

Now 18 and fresh off being drafted second overall by the Los Angeles Kings in October’s NHL Draft, the expectations to perform are much higher for the Newmarket, Ont., native.

The pressure went up another level after Chicago Blackhawks centre and Canadian captain Kirby Dach suffered a tournament-ending wrist injury during a pre-competition game against Russia.

In Canada’s first two games of the round robin, Byfield struggled to make an impact on the scoresheet. He had just one assist in Canada’s blowout 16-2 victory over Germany in their opening game on Boxing Day and went pointless in Sunday’s 3-1 win over Slovakia.

It was against Switzerland that Byfield found his footing in a big way, recording six points (two goals and four assists) in Canada’s 10-0 win and was named player of the game.

On Thursday, Canada beat Finland 4-1 to secure first place in Group ‘A’. They now head to the quarterfinals where they will face the Czech Republic and Byfield has the potential to be a difference-maker as the pressure ramps up.

The first overall pick in the 2018 OHL Draft by the Sudbury Wolves, Byfield made his presence felt immediately during his rookie year. With 29 goals and 61 points in 64 games in 2018-19, he took home OHL and CHL Rookie of the Year honours.

Byfield ratcheted up the offence in his draft year in 2019-20, recording 32 goals and 82 points in 45 games with the Wolves.

His success led to his selection by the Kings, where he became the highest-drafted Black player in NHL history, surpassing Evander Kane and Seth Jones, who were drafted fourth overall in 2009 and 2013 respectively.

With the COVID-19 pandemic wiping out the 2020 OHL playoffs and delaying the start of the 2020-21 OHL season, Byfield used the long pause to add 10 pounds of muscle to his six-foot-four frame, and admitted it’s an adjustment playing with the added size.

"I think it took me a little bit to adjust being a little bit bigger and skating with that," Byfield told TSN’s Mark Masters. "When it comes to putting on muscle, you become more powerful and stronger. I feel faster and heavier in the corners, I think I have to keep on playing my game like that."

"He’s so big and strong," said Byfield’s Team Canada teammate Dylan Cozens. "He’s such a presence on the ice; when he gets the puck behind him and uses his speed and hunts the puck down, I wouldn’t want to be a defender looking at him coming at me."

As dominant as Byfield is on the ice, he wants to make his presence known off of it as well.

In an interview with CBC, Byfield said he aspires to be a role model for young Black hockey players breaking into the game.

"I want a lot of people to have the experience growing up that I did … you just come to the rink, play the game and race wasn't even a factor in that," Byfield told CBC.

Another area where Byfield is lending his voice is with the Janes ALL IN campaign, an initiative created to shine light on women’s hockey to grow the game and help it thrive while celebrating those involved in the game.

"When we put on the Team Canada jersey, we are playing for the name on the front, and to make our country proud," said Byfield. "We need to encourage fans to support our national women’s teams at all levels whenever that jersey is on the ice."