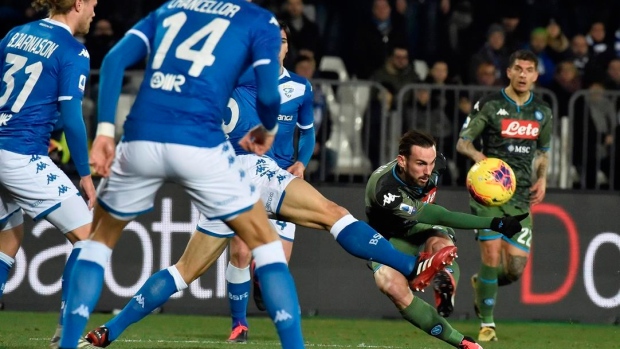 BRESCIA, Italy — Napoli warmed up for its Champions League game against Barcelona by coming back from a goal down to beat relegation-threatened Brescia 2-1 in Serie A on Friday.

Fabián Ruiz curled in a spectacular shot from beyond the area for the winner after a penalty kick from Lorenzo Insigne cancelled out Jhon Chancellor’s goal for Brescia.

Having turned things around under new coach Gennaro Gattuso, Napoli has won six of its last seven matches in all competitions. The run includes a 1-0 victory at Inter Milan in the first leg of the Italian Cup quarterfinals, a victory over Lazio in the previous round, and a win over eight-time defending champion Juventus in the Italian league.

Napoli, which was in the bottom half of the standings just a few weeks ago, moved up to sixth place with a chance of claiming a Europa League spot.

Brescia remained one point ahead of last-placed Spal.

On Tuesday, Napoli hosts Barcelona in a first-leg match of the Champions League round of 16.