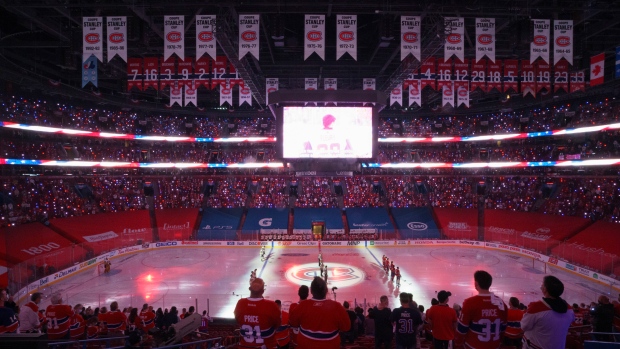 Health Minister Christian Dube made the announcement today, saying anyone attending events at those venues will need to show proof of vaccination and wear masks.

The new rules apply to cinemas, theatres, conferences and graduation ceremonies, and they will also permit Montreal’s Bell Centre to be at full capacity for the Canadiens’ first NHL home game in October.

Dube says Quebec has done well during the month of September, but it remains too early to declare victory in the fight against COVID-19 or to lift the 10-person indoor gathering limit inside private homes.

Earlier in the day, Quebec reported 655 new cases of COVID-19 and two more deaths attributed to the novel coronavirus.

The Health Department says the number of hospitalizations rose by five, to 311, and 91 people were in intensive care, unchanged from the day before.

The Public Security Department says police forces across the province have issued 34 tickets related to the province’s vaccine passport system.

Proof of vaccination has been required to access a range of non-essential businesses and services in the province since Sept. 1, but fines ranging from $1,000 to $6,000 were not issued during an initial two-week grace period.

The province’s public health institute says 89.4 per cent of residents 12 and over have received at least one dose of vaccine and 85.4 per cent are considered adequately vaccinated.

This report by The Canadian Press was first published Sept. 30, 2021.