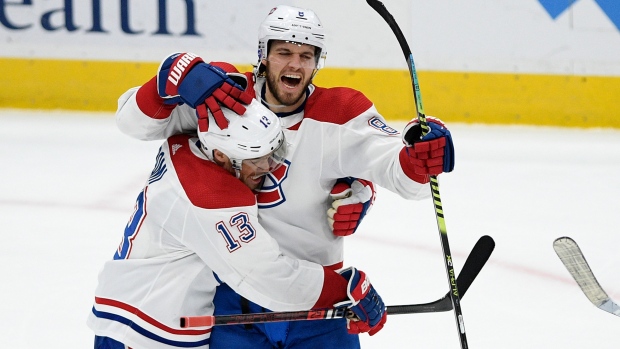 WASHINGTON — All eyes were on Alex Ovechkin needing two goals to reach 700 in his career. The other No. 8 on the ice scored twice instead.

Ovechkin scored his 699th goal to close in on another milestone, but the Washington Capitals dropped their third in a row, losing 4-3 in overtime to the Montreal Canadiens on Thursday night. After Ovechkin was thwarted on a 1-on-1 opportunity early in the 3-on-3 OT, Canadiens No. 8 Ben Chiarot scored his second of the game seconds later to end it.

“He's the most dangerous shooter in the league,” Chiarot said of Ovechkin. “If you're not paying attention to what he's doing out there, then it's going to hurt you eventually. We're always aware when he's out there. That's the thing is you pay a little closer attention to him when he's on the ice.”

Ovechkin was on the ice for more than 22 minutes and put six shots on net. He beat Carey Price off a faceoff win by longtime running mate Nicklas Backstrom 7:29 into the game and had another quality chance on a bang-bang play in the third period.

But the Russian superstar will have to wait to become the eighth player in NHL history to get to 700.

Washington has lost five of its past six games and seven of 10, falling out of first place in the Metropolitan Division. The Capitals are also 1-4-1 at home since the All-Star break.

“There’s no perfect formula to playing 60 minutes,” said winger Tom Wilson, who scored with 20.1 seconds left in regulation to tie it and help the Capitals get a point. “We just need a buy-in from kind of every guy. If everyone’s giving it their all, I think we’re a pretty tough team to beat. We’re excited about the group. There’s no panic. We just need to figure it out and we need to get out.”

Goaltender Braden Holtby allowed goals to Shea Weber, Brendan Gallagher and two to Chiarot on 32 shots, but he wasn't chiefly responsible for the loss. The same defensive woes that plagued the Capitals over the past several weeks came back to haunt them against the Canadiens.

“Way too many turnovers right now,” Washington's Carl Hagelin said. “You can see when we get the puck deep, we create some offence. Especially against a team like this who have five guys back and they backcheck really hard with a lot of speed, you've got to get it deep. You've got to make them make mistakes. It was too easy of a game for them. It almost feels like we think it's boring to play that way.”

Montreal got two breakaways in the opening minutes and could've had a multi-goal lead if not for big saves by Holtby, who continues to play well. There wasn't much he could do on Weber's goal through traffic, Gallagher's in front or Chiarot's go-ahead goal 30 seconds into the third when the defenceman had plenty of time to shoot the puck off the crossbar and in.

“We're just giving the puck away and that's not good enough,” Backstrom said. “(Holtby has) been awesome, I think. We need to help him a little bit more."

Veteran defenceman Brenden Dillon, brought in to help fix some issues, was on the ice for two Canadiens goals in his Capitals debut after a trade Tuesday from San Jose. He was paired with Norris Trophy contender John Carlson, who turned the puck over seconds before Chiarot's first goal.

Price stopped 29 of the 32 shots he faced, and the Canadiens snapped a five-game skid, winning for the first time since Feb. 8.

NOTES: Lars Eller scored his sixth goal in 12 games against the Canadiens since they traded him to the Capitals. ... Center Evgeny Kuznetsov returned to Washington's lineup after missing three games with an upper-body injury. ... Capitals forward Brendan Leipsic was a healthy scratch for the first time this season amid a 33-game goal drought. ... Canadiens defenceman Xavier Ouellet left early in the first period after a hit by Garnet Hathaway and did not return because of an upper-body injury. ... Gallagher came back after missing a game with a lower-body injury. ... Victor Mete was out of the Canadiens lineup after taking a shot to the foot Tuesday at Detroit. Coach Claude Julien expects Mete to be out the rest of the week.

Capitals: Ovechkin continues his pursuit of history at the New Jersey Devils on Saturday afternoon.