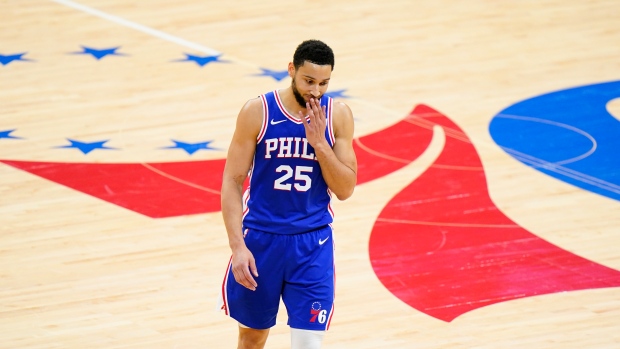 Ben Simmons has been suspended for one game due to conduct detrimental to the team, the Philadelphia 76ers announced on Tuesday.

76ers coach Doc Rivers threw Ben Simmons out of practice on Tuesday and the suspension came shortly thereafter, according to ESPN's Adrian Wojnarowski.

As a result, Simmons will miss the 76ers’ season opener at New Orleans Wednesday night.

The three-time All-Star guard was a holdout in training camp in the wake of his offseason trade demand. He reported last week and practiced Sunday and Monday with the Sixers. He was scheduled to practice and talk to the media on Tuesday.

Simmons lingered outside the huddle, dribbled a basketball and looked uninterested during a team huddle at Monday's practice, where he did not practice with the first team.

The 25-year-old from Australia had four years and $147 million left on his max contract when he decided he wanted a trade.