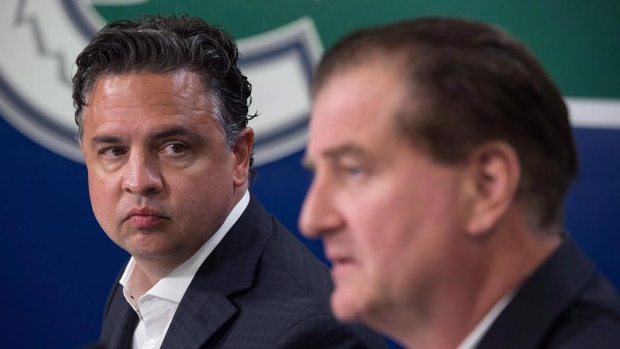 VANCOUVER — The Vancouver Canucks' top brass say everyone is on the same page when it comes to re-building the team for the future.

General manager Jim Benning said the club still wants to draft good players, develop them and then support them when they're ready for the NHL.

"That's been our plan for awhile and that hasn't changed," Benning told media on a conference call Thursday.

His comments come after the Canucks announced in a release Wednesday that they were "amicably" parting ways with Trevor Linden, the team's president of hockey operations since 2014.

The Canucks added that Linden was leaving to pursue "other endeavours," while the team's former captain said in a separate statement that he plans to "step back from the spotlight" and enjoy time with his family.

Benning said he doesn't know what prompted the split.

The news caught some within the Canucks organization off guard, head coach Travis Green said on the conference call.

"Everyone's surprised that it happened," he said. "We don't really know the specifics."

Canucks owner Francesco Aquilini said on Twitter that Benning is slated to take over hockey operations.

The general manager said he expects to hold the new role for the foreseeable future.

"(Aquilini) said he's not looking to hire someone as the president of hockey operations," Benning said.

Benning and Green both said the team's coaches, managers and owners are all onboard with re-building the team.

Aquilini said on Twitter that the pair would "continue rebuilding the team as per the plan we have in place."

"A rebuild is a long, slow, gradual process. Everybody needs to be united behind the same vision and pulling in the same direction," the post read.

"He's on board," he said. "He doesn't interfere with what we do. He listens to us, he asks questions and then he lets us do what we need to do."

There's no magic formula when it comes to a rebuild, Green said.

"You look at different teams, there's different time frames. But we all agree that our young players coming into the line up are going to be very important to us moving forward," he said.

That could mean that some veteran players will be replaced by fresh faces, Benning added.

"We want our young players to play in the NHL and be really good players," he said. "And if they're ready, they're going to play. And if someone else has to go, that's the way it is and that's the nature of getting better in this business.”