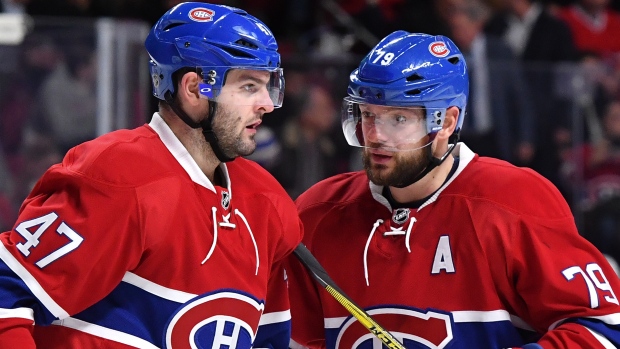 Montreal Canadiens general manager Marc Bergevin told reporters Sunday he has already given both Alexander Radulov and Andrei Markov his best offer and won't be negotiating from those terms. Bergevin said he wants both players but not at the current terms they are asking for.

Both players are currently free agents with Radulov reportedly considering offers from multiple teams, and Markov reportedly looking for a two-year contract. Bergevin said Markov's ask of a two-year deal was not the biggest obstacle to negotiations.

Radulov returned to the NHL from four seasons in the KHL with the Habs last year and finished with 18 goals and 36 assists in 76 games. It was reported earlier this off-season the 30-year-old was seeking a contract as long as seven years.

Markov has spent his entire 16-year NHL career with the Canadiens, and the 38-year-old finished with six goals and 30 assists in 62 games in Montreal last year.

In other Habs roster news, Bergevin said he is trying to get forward Alex Galchenyuk re-signed as quickly as possible. The 23-year-old Galchenyuk, subject to trade rumours earlier this off-season, is a restricted free agent coming off 17 goals and 27 assists in 61 games for the Habs last year.