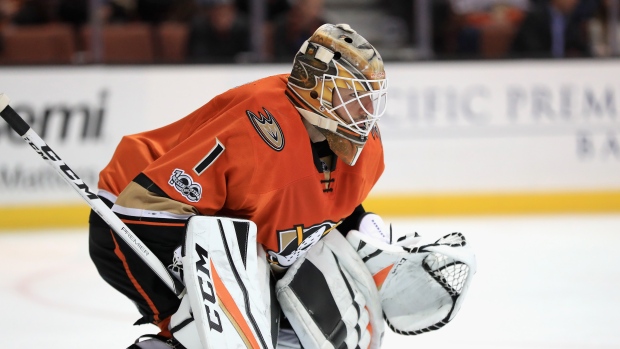 People keep asking Jonathan Bernier if this is the best he's ever played, as though his re-emergence in Anaheim is some big surprise.

It's not a shock to the 28-year-old, who recently wrapped up a sterling March in which he went 10-1-2 with a cool .941 save percentage. Bernier has gone 12 straight starts without a regulation loss, thrusting himself unexpectedly into the goaltending conversation for the Ducks' upcoming playoff run.

"I've never lost confidence in myself to be honest," said Bernier during a recent phone interview from southern California.

"I always believed that I'm a good goalie and I can do the job in this league and obviously to have that stretch right now — I'm not trying to prove anything to people I think I'm just trying to get better every day for me. I only try to push myself. I'm not looking really at what people are saying or what they think it's just all about me (and what I think) right."

It wasn't long ago that Bernier struggled to win even once. The Laval, Que., native lost his first 10 starts with the Leafs last season, quickly souring any future under then-new head coach Mike Babcock. Toronto briefly demoted him to the minors sent him to Anaheim in the summer, following the acquisition of his replacement, Frederik Andersen.

Whether because of poor play, poor teams, injury or struggles handling an intense spotlight at a young age, Bernier's experience with the Leafs never panned out. He wonders now how he might have fared if the 2013 trade from Los Angeles had come at a later point in his career, when he had more experience under his belt, more maturity for handling the ups and downs.

"There's a lot of things I would've done, probably, different when I was in Toronto, especially my third year," said Bernier, who has a 20-7-4 record with the Ducks this season. "But I believe that I learned from what happened and I matured a lot as a player and as a person. And you've just got to take all those experiences, either good or bad, and you've just got to keep going forward. If you look back that's when you get screwed."

One lesson from Toronto was worrying less about end results and more about the process of getting there. During that poor start to his third season with the Leafs one loss just snowballed into another, and Bernier felt almost helpless to stop it. He's focused now on going shot to shot, period to period, game to game and nothing beyond that.

He's also made some slight technical changes in his year with the Ducks, coached by Randy Carlyle, his one-time boss with the Leafs.

Bernier isn't being as aggressive in the crease as he was under Babcock, who prefers his goalies to play that way.

"Sometimes you just don't feel as comfortable by doing this," Bernier said of aggressively challenging shooters. "We all have a comfort level in our depth and I don't think I was (comfortable) at beginning and maybe it had an effect on my game."

Bernier has only played this much (38 games) and this well at one point in his NHL career — that first season with Toronto when he assembled a .923 save percentage in 55 games. Even he's noticed that his numbers were better then than they are now, so he's not quite sure whether he's now truly at his best.

Regardless, his confidence in the crease is gradually increasing. He has gained Carlyle's faith after stepping up during a recent injury to starter John Gibson.

"I think (Carlyle) has confidence in me and that makes a big difference for a goalie when your coach knows that you can win some games and he has confidence in you then you feel confident right," Bernier said, a striking contrast to Babcock, whose lack of faith became all too apparent.

Without much outside noise or distraction, Bernier has found it easier to focus on hockey in his return California — where he started his career with the Kings. His strong March has made him only a slight underdog to Gibson to start for the Ducks when the playoffs begin next week.

An impending unrestricted free agent, Bernier even has hopes of getting another crack at being a No. 1 somewhere next season.

"Hopefully I can get another chance at it. But, to be honest, I'm really focused on right now and not focusing too much ahead for next year. I think we have everything to go deep and I really want to focus on what's going on now and we'll see in the summer what's going to happen."