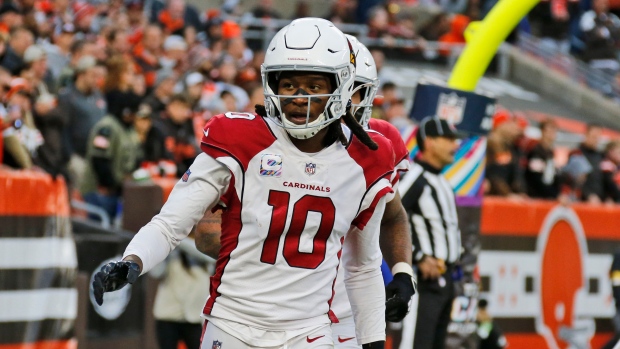 With the first six weeks of the season in the books, we’ll get a little bit of a different look from the NFL this Sunday.

First of all, it’s our first chance to bet on teams coming off their bye weeks, with the New Orleans Saints, San Francisco Giants, Atlanta Falcons and New York Jets getting the extra week to prepare.

Show of hands if you think it will make a difference for Zach Wilson versus Bill Belichick.

It can’t go much worse for Wilson and the New York Jets than it did in their first meeting with the New England Patriots.

Meanwhile, we also get three teams favoured by double digits this week, including the Arizona Cardinals (-18) at the Houston Texans, the Los Angeles Rams (-16.5) versus the Detroit Lions, and the Tampa Bay Buccaneers (-11.5) versus the Chicago Bears.

Revenge will be on the menu in a couple of those games featuring double-digit favourites, including one that absolutely had to be featured in this column.

Here are our best bets for Week 7 in the NFL.

Stay with me here, for a minute.

The Cardinals are the biggest favourite on the board in Week 7.

Double-digit favourites are 8-0 outright and 6-2 against the spread, and the Cardinals have shown absolutely no sign of taking their foot off the gas in any game this season.

Arizona has scored 31 points or more in five of its first six games.

Now they are set to play a Texans’ defence that ranks among the worst in the NFL with 28.7 points allowed per game this season.

Well, he’s only topped that mark in just two of his first six games of the season, so that’s not good.

What about the opponent?

Will there be any added motivation there?

Hopkins wasn’t very happy at all when he left Houston two years ago, and now he gets to play his former team for the first time.

Hopkins wasn’t available to speak this week, and my guess is that if there is a game that he is going to go off in, this might just be the ideal matchup.

With six touchdowns in six games this season, the touchdown prop will also be in play.

To be completely transparent, the only thing stopping me from absolutely unloading on Hopkins props is the fact that Bill O’Brien won’t be on the Texans’ sideline.

Then again, you know he’ll be watching from somewhere.

I’ll take Hopkins over 69.5 receiving yards as my best bet for Week 7.

We didn’t get the shootout we were looking for last week in the KC-Washington game, but the Chiefs side wasn’t to blame.

Patrick Mahomes and Co. put up 31 points, despite turning the ball over three times, and 499 yards of offence.

Now they get a Tennessee squad, fresh off a short week, that has been decimated by injury. Stud left tackle Taylor Lewan is out, while both Julio Jones, who never seems to be healthy, and A.J. Brown are both nursing injuries.

Defensively, the situation is even more dire. The Titans No. 1 and No. 2 corners are down, as is their top backup. Tennessee was already the 27th-ranked pass defence per DVOA and will now have to deal with a Chiefs team that leads the NFL in points per drive.

Tennessee ranks 25th in pass rush win rate, and has surrendered at least 30 points to each of the top three passing offences they’ve faced so far (Arizona, Seattle and Buffalo). That’s got to be music to Mahomes’ ears, who has torched this team over his career.

The 2018 MVP has thrown for 740 yards and six TDs versus the Titans in two career meetings, leading the Chiefs to 32 or more points both times.

Of course, on the other side of the ball Derrick Henry is set-up for success against KC’s putrid run defence, but eventually Tennessee is going to need to take to the air if they want to keep pace.

Easier said than done when your best offensive lineman is out, and your top two wide receivers are less than 100 per cent.

Luke Bellus: Cincinnati Bengals vs. Baltimore Ravens Over / Under 46.5

Two of the more dynamic quarterbacks in the game will be on the field Sunday afternoon when Joe Burrow and the Bengals take on Lamar Jackson and the Ravens.

Burrow has this Cincinnati offence on a roll this season as they have scored at least 22 points in five of their six games, and enter Week 7 with the 11th-most points scored in the league.

Meanwhile, Jackson and the Ravens possess one of the top rushing games in the league and ranked seventh in points for and fourth in total yards.

These two teams both know how to score and I believe we will see a lot of points on Sunday.

The Bengals defence has been very good this season, allowing just 18.5 points per game this season.

The defence has been so solid that the under is 5-1 this season in Bengals’ games, but Jackson has enjoyed a lot of success against Cincinnati in his career.

Baltimore is 5-0 and has averaged 32.2 points per game with Jackson under centre against the Bengals.

I trust Lamar to keep this offence rolling against a franchise he has dominated, and believe that Burrow has this Bengals team ready to fight back against a divisional rival.

Sunday’s matchup is going to be a lot of fun.