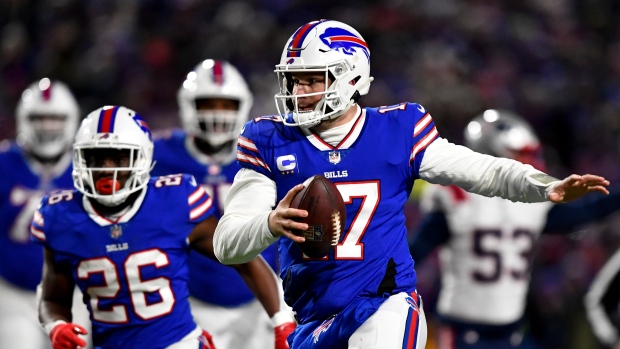 After what felt like the longest week of the NFL season, the Divisional Round has arrived, with four highly anticipated matchups on the card.

All four spreads for this weekend’s games are currently 5.5 points or less.

Per ESPN Stats & Info, it’s the first time that has happened in the Divisional Round since 1971.

The biggest number on the board is the Green Bay Packers as 5.5-point favourites against the San Francisco 49ers.

Meanwhile, the spread for Sunday night’s playoff game between the Buffalo Bills and Kansas City Chiefs, a rematch of last season’s AFC Championship Game, is down to Chiefs -1.5.

The Chiefs and Bills are the top two choices to win the AFC, according to oddsmakers, indicating that the winner of that game is destined for the Super Bowl.

We aren’t looking that far ahead this weekend, as we focus on four of the final seven opportunities to cash in with another winning NFL weekend this season.

Here are some of our best bets for the NFL Divisional Round.

If you read the Morning Coffee on TSN EDGE or follow me on Twitter, then you know that I jumped on Josh Allen to go over 48.5 rushing yards against the Chiefs on Thursday morning.

The Bills’ MVP rushed for 66 yards on six attempts in last week’s 47-17 win over the New England Patriots.

The Patriots had no answer for how to contain him, and it quickly wore out their defence as Buffalo jumped out to a 27-3 lead at the half.

There’s no reason for me to think that the Bills will suddenly just scrap what worked so well for them against New England, especially since they will likely need to be at their absolute best for a full four quarters in order to have a chance to go into Kansas City and come out with a win.

Allen has rushed for 63 yards or more in four straight games dating back to the regular season.

I think Allen and the Bills remain aggressive in Kansas City and do whatever it takes to pull out another victory on the road.

That will mean leaning heavily on Allen to use his legs, keep the chains moving and keep Patrick Mahomes off the football field.

I have no problem making Allen to go over 52.5 rushing yards my best bet for the Divisional Round.

I had the Bills last week and after a 30-point victory over the rival New England Patriots, I am going right back to them again as my top play for the Divisional Round.

Buffalo won’t be able to play any better on offence than they did last week. Scoring seven straight touchdowns on seven drives is about as close to a perfect game as you can get in the NFL playoffs. The Josh Allen numbers were out of this world. More touchdown passes (5) than incompletions (4). Never facing a fourth down, no punts, no turnovers, the most optimistic Bills fan couldn’t have even dreamed of a performance like that.

Now Buffalo faces a defence that isn’t as good as New England’s. The last time the Bills were at Arrowhead in Week 5 they put up 38 points as the Chiefs had no answers for Josh Allen through the air (315 yards) or on the ground (59 yards). Simply put I don’t know how the Chiefs plan on getting stops against an offence playing at this level.

The Chiefs also have a dynamic offence filled with stars but the difference is Buffalo also has the top-ranked scoring defence. They forced Patrick Mahomes into throwing a pair of interceptions and 21 incompletions in that last meeting. Including playoffs, Buffalo has surrendered over 21 points just once in its last eight games.

The Chiefs put up 42 points against Pittsburgh last week, but their first five drives of that game were punt, punt, interception, punt and fumble for a Steelers touchdown. Pittsburgh’s offence couldn’t stay on the field so their defence got worn down and the Chiefs rolled from there. Safe to say if the Chiefs offence gets off to another slow start, the Bills will put them away early.

Although Buffalo did beat Kansas City in the regular season, they have circled this game on their calendars since losing the AFC Championship last year at this venue. The Bills are well aware that to get to where they want to be they must beat the Chiefs in the playoffs. They are primed and ready to do that on Sunday night.

Jimmy Garoppolo has started four playoff games in his career.

Now, he’s set to take on a Green Bay Packers defence that allowed 219 passing yards per game this season.

Earlier this season Garoppolo passed for 257 yards against this Packers defence; however, that game was played in San Francisco with warm weather and calm winds.

The weather Saturday night at Lambeau Field is expected to be extremely cold with some wind.

In addition to the colder temperatures he faces, Garoppolo is dealing with a torn UCL in his right thumb and a sprained right shoulder. Those are injuries that the cold will impact.

I expect the 49ers to limit Garoppolo through the air and approach the game with a focus on running the ball.

My biggest fear with taking this under is Deebo Samuel taking a bubble screen and picking up a massive gain after the catch, but if Green Bay can prevent the 49ers from hitting any home runs in the passing game I think Jimmy G will struggle to hit the over on this prop.

Betting against Tom Brady in the playoffs seems like a recipe for disaster.

So let’s frame it a little differently.

What about betting against the GOAT without two of his top-three receivers in the lineup, and a banged-up offensive line?

Now, what about betting against TB-12 knowing those facts, and the fact that the Bucs are about to face a Rams team that owns an incredible pass rush?

For all of his playoff accolades, Brady is just 17-17 against the spread in his last 34 postseason starts.

Brady and the Bucs have faced L.A. twice during the past two seasons and lost both times.

The key here is the injuries to Tampa Bay’s offensive line. Right tackle Tristan Wirfs and Pro-Bowl centre Ryan Jensen were injured last week versus the Philadelphia Eagles, and once they were hurt, Philly’s D was able to generate a ton of pressure.

Of course, it didn’t matter because the Eagles can’t cover, but that won’t be the case against L.A. Jalen Ramsey is capable of neutralizing Mike Evans, forcing Brady to win through the air with Rob Gronkowski and a handful of receivers he probably doesn’t trust.

On the other side of the ball, the Rams passing game was phenomenal against Arizona, and has put up 719 passing yards and seven touchdowns in their last two meetings versus the Buccaneers.