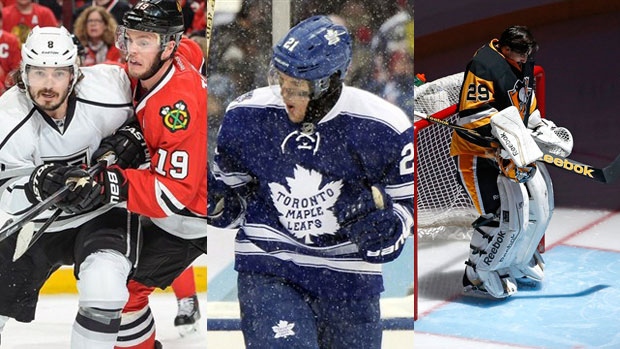 As 2014 winds to a close, TSN.ca looks back at the stories and moments that made the year memorable. TSN.ca's writing staff reflects on the best hockey moments from the past 12 months including a true Winter Classic, a playoff series for the ages, a touching tribute and more!

Putting the Classic Back in Winter
By Jed Bick

In a season where little went right for the Toronto Maple Leafs, who would collapse in unbelievable fashion for the third-straight year, there is one positive moment which proudly stands out.

The Leafs faced the Detroit Red Wings on New Year’s Day in the annual NHL Winter Classic at “The Big House” in Ann Arbor, Michigan and came away with a 3-2 shootout victory.  The Leafs overcame an inevitable shootout goal by Detroit’s magic man, Pavel Datsyuk, as their own shootout wizard Tyler Bozak would seal the deal for the Buds.

It was special for the Leafs to win that game, as it is an event where some teams may never get the chance to play, so the team and its fans can always look back at the memory with pride.

But the best part was the atmosphere. The place was packed with an NHL record-setting attendance of 105,491 boisterous fans that seemed to be an equal split between Leafs and Wings fans. Both teams also wore coloured jerseys, a rarity in North American professional sports.

The red and blue contrasted perfectly and the gently falling snow was the flawless addition to an overall unforgettable display of how hockey should be played and enjoyed, outdoors in the cold.

With all due respect to the New York Rangers, there was no way the 2014 Stanley Cup Final could live up to the finale of a series that saw two teams that had won three of the previous four Cups duke it out in a seven-game thriller.

The Kings almost looked to have blown the series, letting the Hawks claw back from a 3-1 deficit to force Game 7 and Chicago made the most of it, taking an early 2-0 lead in the decider. Three goals in just over a minute near the end of the first made a game of it and the teams traded goals in the second and third.

Andrew Shaw almost ended it on the doorstep in the final 10 seconds, but Jonathan Quick’s pad made overtime a reality. And, naturally, in a series that features the likes of Patrick Kane, Anze Kopitar, Jeff Carter and Jonathan Toews; it’s an Alec Martinez knuckler that bounces in for the winner.

It may not have been a beauty of a goal, but the game was timeless. This was the second straight Western Conference Final between the two teams: I think we could all get used to this being a recurring match-up.

On Oct. 22, Canada experienced something that most in this country thought they never would: A terrorist attack.

A lone gunman shot and killed 24-year-old Cpl. Nathan Cirillo at the National War Memorial in Ottawa before storming Parliament with gun in hand.

The game between the Toronto Maple Leafs and Ottawa Senators scheduled that night in the nation’s capital was cancelled due to the tragic events.

What followed was a heartwarming display of solidarity, both from Canadians and Americans alike.

First, on the night of the attack, the Pittsburgh Penguins decided to sing “O Canada” before their home game with the Philadelphia Flyers. Two American teams, playing on American soil belting out the Canadian national anthem to show their support.

Then on the first Saturday after the attack, the Senators, Maple Leafs and Canadiens put their rivalries aside for a few minutes as the three cities sung the anthem as one in a resounding, goosebump-rendering display of national pride.

It was one of those rare moments when sports can bring people together to heal after a tragedy and one that soon won’t be forgotten.

"What if Everyone's Gone in a Shootout?"
By Shane McNeil

Don’t ask me why I found myself watching a Washington Capitals-Florida Panthers game in the first place, because it’s a long story, but last week’s tilt between the two finally answered a question I’d been wondering about for quite some time.

What happens once everyone on the roster takes a shootout attempt?

The two sides went at it in a 20-round shooutout that eventually handed the Panthers a 2-1 victory.

It was surprisingly fun to watch, oscillating from “This is why Player X has never taken a shootout attempt” to “Who knew Brooks Orpik had those hands?”

While I must express some disappointment that Al Montoya and Justin Peters never got their chance to grab a stick, it at least provided concrete proof that the order just re-sets and everyone gets another crack.

Kudos to Nick Bjugstad, then, for ending the epic drama.

I guess Roberto Luongo and Braden Holtby also deserve credit for stopping a combined 29 breakaways, too.