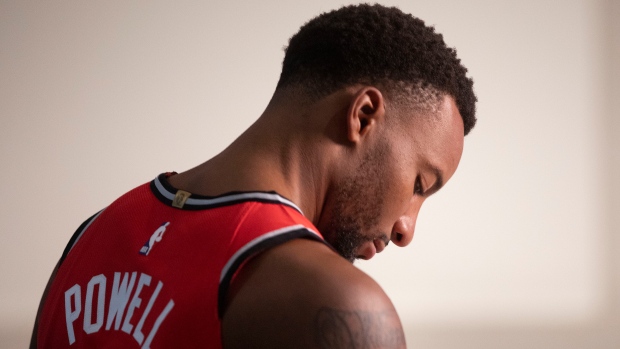 QUEBEC CITY – It was a memorable summer for NBA champion Norman Powell – a trip to Spain with his buddies, taking the Larry O’Brien Trophy to his old high school in San Diego, surprising his mom with a new car for her birthday.

However, the experience that stands out most, and one that could have a lasting impact on his career, was a rare opportunity to pick the brain of an all-time great and one of his childhood heroes.

The Toronto Raptors guard was among an exclusive group of roughly 20 NBA players to attend an invite-only minicamp hosted by future hall of famer Kobe Bryant, as first reported by Jovan Buha and Sam Amick of The Athletic. The camp, which was held at Bryant’s Mamba Sports Academy in Thousand Oaks, Calif., ran for two days in late August.

Powell scored an invitation from Lakers assistant coach Phil Handy, who was with the Raptors last season and has worked with Bryant for years, as did Raptors forward OG Anunoby. Also on hand: Clippers forwards Kawhi Leonard and Paul George – who didn’t participate in the workouts but attended part of the camp – as well as Nuggets rising star and Kitchener, Ont., native Jamal Murray.

Powell was just three when Bryant broke into the league with the Lakers. He was six when Bryant won his first of five championships. Growing up just south of Los Angeles, he idolized Kobe. So, as you can imagine, the chance to get some feedback from the man himself was a dream come true.

“I was excited to take advantage of the opportunity,” Powell said following the first of two practice sessions on Tuesday, the third day of Raptors training camp in Quebec City. “To be able to sit, talk and see him break down the game – like, that’s my favourite player. I always try to take his mentality and approach to the game and implement that into the way I played – the competitive fire, passion and daily grind of getting better and working on the little things.”

“So it was great to be able to see that from all aspects. Off the court where he’s talking about breaking down film and games and what he would do and then on the court seeing him talk for 45 minutes on one thing – a jab step or a shot. It was just his intense focus to detail was amazing.”

Nobody should be surprised to hear about Bryant’s “intense focus,” even in a more casual setting. Throughout the course of his extraordinary 20-year NBA career, Bryant was known for his killer instinct and attention to detail – the type of teammate guys either loved or hated to play with.

Now four years into retirement, the 41-year-old has a lot of wisdom to impart. It’s just a question of whether your skin is thick enough to accept his teaching. Powell was all ears.

“I learned a lot just talking to him personally – his mentality, his approach,” said the 26-year-old Powell. “There is something that I asked him about specifically and I got a great answer and I have been using it ever since. I am going to keep that for myself. But just the level of detail and how he approaches things and what he sees. Him sitting there and watching us go through drills and then stopping us and saying, ‘That ain’t going to work.’ Then really breaking it down to the smallest detail. I would be like, ‘I thought that was good’ and he would say, “Nah, that ain’t going to work.’ ”

“I see where people think he is insane in the way he thinks but he’s really like that. It was amazing to see that high level of thinking.”

The camp was old-school, right up to the way in which Bryant coached the players. There was no video and no clips shown, instead he broke down plays on a whiteboard. There were no cameras permitted, meaning nothing surfaced on social media – an anomaly in 2019. The entire event was kept under wraps until recently.

Although Powell’s invitation came from Handy, who co-hosted the camp, Bryant had to sign off on the list of attendees. Powell got a chance to play against Bryant once during his rookie season, the 2015-16 campaign, Kobe’s last in the NBA. They’ve spoken before, briefly, but Powell got to see another side of his favourite player.

“He literally broke down everything,” he recalls. “He would spend 30-to-45 minutes on one play. Just playing with it. Like OK, if I do this, I’m going to do that. If we put him here, what are the options? It was crazy.”

“I watched videos growing up, all his interviews, articles, this, that and the other. You get a sense [of what he’s like] but you never get a full sense until you are actually with him. It’s just a different dynamic. He remembers games in the ’70s and ’80s. He told us he was in a game and [he saw] them switch defences. It was [against the] Bulls [in 1998]. I’m like, it’s 2019, how do you remember that stuff? But that’s his mentality.”

The Raptors were obviously thrilled that Powell was able to have that experience. Head coach Nick Nurse joked, “I’m not so sure there was a lot of passing at that camp,” but there’s no denying Bryant had and still has a great sense for the game. As Nurse went on to point out, whenever you get a chance to learn from somebody that’s mastered your craft – whether it’s as a player or as a coach – that can be a valuable thing.

Now we’ll see if Powell can implement it with Toronto this coming season – an important one for the fifth-year pro. The Raptors don’t want him to do his best Bryant impression, but they do need him to be a more aggressive and assertive version of himself.

With Kawhi Leonard and Danny Green in L.A. there are more minutes and shots available on the wing, as well as two vacant spots in the starting lineup. Powell has played and started at both of those positions in the past – the two and the three – but he’s set his sights on winning the job at his natural spot.

“Starting at the two spot,” said Powell, when asked for his goals over the next three weeks of training camp. “Trying to put in the coach’s head that I should be a starter and separate myself from everybody else who sees the opportunity in front of them.”

He’ll have competition. Just a day earlier, Fred VanVleet spoke about his goal to start alongside Kyle Lowry in the backcourt. VanVleet started 28 games last season, including 14 at shooting guard. Powell only started three, though he does have 63 starts under his belt over the last four seasons.

Things are different now. When Powell would start next to Lowry and DeMar DeRozan, his role was limited and very rigid – defend your position and hit open shots. He’ll still be asked to do those things at a high level, however he should have more freedom offensively without DeRozan or Leonard on the floor.

His biggest challenge has always been finding the balance between being aggressive and attacking the basket – which is a big part of his game – and remaining under control. That’s something the coaching staff continues to work with him on, but they’re raving about his performance early in camp. Through three days, he’s been a standout.

“[He’s been] really unbelievable,” Nurse said. “He's got a lot of pop and is knocking down everything in sight. But in saying that the biggest thing I've seen from him is he's got himself much better at one of the things we're focusing on, when he's taken it into traffic. You know, we're trying to teach him that when he's drawn two [defenders] his job is done. It's not his job to try to rustle it up to the rim between two and three guys and he's getting there on that and that's been a big, big plus for us.”

Powell has shown flashes of being an impact player, even a starter, in this league – his heroic playoff performances immediately come to mind – but can he finally put it all together and be more consistent? Older and wiser, he says this will be his year.

“I prepared myself mentally,” he said of his busy off-season. “Just viewing the game differently, my approach to the game, my preparation, building that mental fortitude to keep going no matter what the situation is. I think I really have tied into that. Then for my game development, I really focused on all areas of my game. There wasn’t one specific area I tried to improve on like I did previous summers. It was everywhere.”​